Having zero percent royal blood, a random husband and wife left the Lindo Wing at St. Mary’s Hospital — where Catherine, Duchess of Cambridge, was in labor with her third royal baby — to find international press waiting.

ABC News’s James Longman shared a photo of a couple on their way out of the Lindo Wing at St. Mary’s Hospital in London, which would be a pretty naturally occurring phenomenon. Except it’s game time for the growing royal family. Royal baby three is on the way.

Kate Middleton was just admitted to the hospital in the “early stages” of labor to give birth to the third royal child with her husband Prince William, the Duke of Cambridge.

So the press — and the world — is eagerly awaiting any sign of the child. When the baby arrives, the family will step outside the very same doors in front of hundreds of reporters, quick-shooting photographers, and fans.

This was not that kid, and not that couple. But it looks like the royal treatment was awaiting a random child anyway. “Unsuspecting couple have new baby – and find the world’s press waiting outside,” Longman wrote.

It’ll be a story for the family forever. 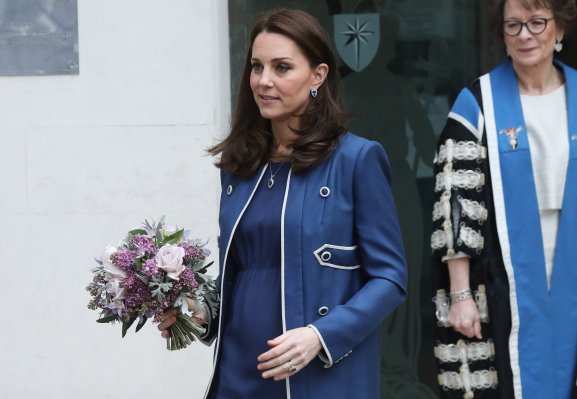