Starbucks Will Host Unconscious Bias Training. Will It Work?

A Starbucks manager in Philadelphia called the police on two black men on April 12, leading to their arrest. The two men, who had been waiting for a friend at the store, were released without being charged.

Starbucks has since apologized and announced it will close more than 8,000 of its stores in the United States to provide “racial bias” training for its 175,000 employees. Starbucks’ COO Roz Brewer said the sessions would focus on “unconscious bias training,” a form of diversity education that focuses on the hidden causes of everyday racial discrimination.

Unconscious bias training has become a popular approach to diversity education. The trainings often begin with demonstrations of how the mind operates in ways that are outside of conscious awareness or control. These demonstrations show that people make, and sometimes act on, snap judgments based on the other person’s race, without any conscious intention.

Research shows that this source of racial discrimination can be reduced in a number of ways. For example, setting objective criteria for decision-making could have made a difference in the Starbucks incident. As Starbucks CEO Kevin Johnson described, the manager used personal judgment in calling the police. Formal rules that prevent the influence of racial bias in calling the police could have prevented the incident altogether.

Some unconscious bias trainings incorporate discussions of solutions such as these. But there is no standard format for trainings. Some involve little more than a series of narrated PowerPoint slides. Others involve expert instructors who hold small, intensive workshops that can last for days.

The novelty of unconscious bias training means there is little direct evidence about whether it works. To determine its potential, researchers have turned to clues from other types of training.

One study looked at older types of diversity trainings that focused on the negative legal consequences of discrimination. It found that such trainings can backfire when managers resent the possibility that they could be singled out for punishment.

By contrast, employees may be more open to unconscious bias training because it focuses on how bias is universal, rather than singling out a few “bad apples.”

However, other research shows that highlighting the prevalence of bias makes people more likely to express their bias.

Unconscious bias training will not solve the whole problem. Discrimination has other causes that aren’t fully dealt with in this kind of training, such as explicit prejudice or policies that have disparate impacts on people of different races. Effective solutions will require multiple approaches to addressing discrimination, not just one.

This story has been updated to reflect the correct date on which the incident at a Philadelphia Starbucks occurred. 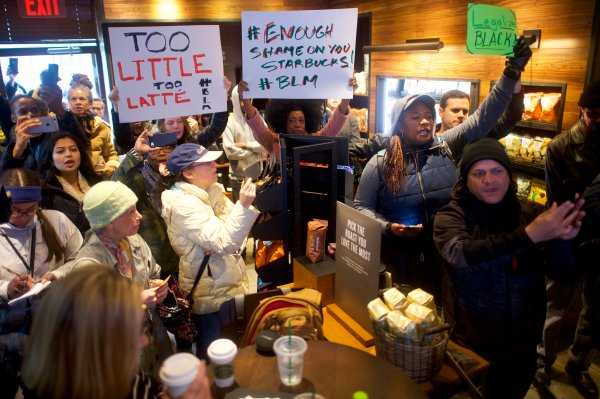 Starbucks Is Closing Thousands of Stores for Racial Bias Training. Here's How Much Money It Could Lose
Next Up: Editor's Pick