The Boss: How STATE's Jacq Tatelman Is Helping Children Around America

I often say I was born in a rack of clothing. I learned my love and downright obsession for clothing and accessories directly from my parents. My father had several leather stores around New York City, and my mother had a clothing store in the basement of our home. As I got older, I could only envision myself working in fashion.

When I met my husband Scot he was at a pivotal moment in his career. He’d become disenchanted with his job in the non-profit space and was ready to start his own “thing.” He spent his whole life trying to make the world a better place, so when he decided to follow his passion and mentor underprivileged

kids, I knew I had to join him. I had no clue where his idea would take us, or that it would become so meaningful to my life, but I was excited to take the ride alongside him.

In 2009 we launched Camp POWER. It’s a one week fully-funded camp supporting 5th through 10th grade children from underprivileged neighborhoods in New York City. This one week camp — now in its 10th year — is a love-filled experience for campers and the staff, who often use their personal vacation time to participate. However, one thing always caught our attention. Every year when the kids arrived at camp, we’d see them carrying their possessions for the week in a plastic bag. So one weekend, after wrapping up another camp session, Scot and I started to discuss how we could do more to help the kids and the communities that were so dear to us. It was in that moment that we decided to create STATE Bags. For every bag we’d sell, we’d give one to an American child in need. We were living in Boston at the time, and I was seven months pregnant, but within six months of that initial conversation we had packed up and moved back to Brooklyn to start our company.

Scot and I dove head first into the business and launched in January of 2013 with three simple styles of cotton canvas backpacks. It was a thrilling time, especially since we were mixing both of our interests — fashion and philanthropy — and giving back to communities that had given us so much. But the reality of being entrepreneurs in an extremely saturated market hit us fast, and we were plagued with production issues, a small budget and a scant understanding of how to drive e-commerce sales. Weeks would go by and we’d only sell a bag or two. Just remembering those times makes my stomach turn. But Scot and I are never afraid to ask for help when we need it. We took a step back, paused on design, pulled away from PR and fully re-branded. New logo, website, bags, manufacturer — it was a whole different brand.

Once we launched the new STATE Bags our luck started to change. We caught the eyes of some celebrities, influencers and large retail chains, such as Urban Outfitters and J.Crew, and our little idea was slowly turning into a business. All these high profile collaborations gave us the momentum we needed to keep going, and we brought in an old friend, Beryl Solomon, to help us ideate on how to keep moving forward. We hired Solomon as our new CEO in January 2015, and today we’re a company of 15 employees. I’m the co-founder, but I’m also the creative director and oversee marketing and campaigns. Our sales more than doubled from 2016 to 2017. We’ve also embraced wholesale, and our products for kids, women and men can now be found in Nordstrom, Bloomingdale’s, Barneys New York, Shopbop.com and specialty shops around the country.

When I walk into our sunny Soho office in the morning and see the team sitting at their desks, I’ll walk over to Scot and just say, “All these people work for STATE Bags!” — it never gets old. After five years of business and holding onto the dream it’s finally a reality. STATE has also donated hundreds of thousands of backpacks to kids in need across the U.S. We get packages of thank you notes all the time. It means so much to kids to get a brand new backpack for school, and it takes a financial burden off of struggling parents.

I never could have imagined owning a company like STATE when I was a child, but I couldn’t be prouder to be the co-founder of a company that focuses on giving back. 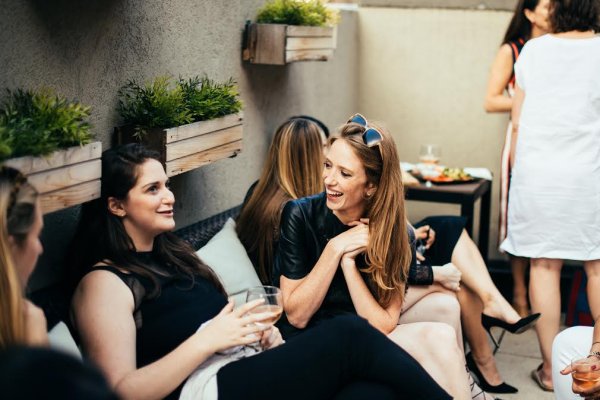 The Boss: How Kate Ryder Started a Healthcare App Designed for Women
Next Up: Editor's Pick