Meghan Markle’s previous roles on the small screen include Rachel Zane on Suits, TV movies like Dater’s Handbook and When Sparks Fly and even a fun Tostitos commercial. Now, the roles have reversed. Instead of Markle starring in a show, she’s the subject. And a glut of television movies and specials are slated to premiere leading up to the royal wedding wedding to Prince Harry on May 19.

The majority of the TV specials about Markle and her rise to royalty are nonfiction and more documentary-focused, but you can expect some reenactments in TV movies as well. The countdown commenced with Gayle King’s April 20 special on CBS “Meghan Markle: American Princess.” Before heading down the aisle to meet Harry at the altar, Markle had another “televised wedding” as Rachel Zane on the season 7 finale of Suits.

While we may not yet know who is styling Markle’s wedding dress, we do know there will be no shortage of royal wedding TV episodes. Here’s a look at some specials to expect before and right after the wedding at St. George’s Chapel in Windsor Castle.

Fox’s two-hour special airs a little over a week before the royal wedding. According to Fox, viewers will get an “inside look into the lives of this global power couple straight from experts, socialites and friends intimately connected with the House of Windsor.” Featured guests on the show include Markle’s half-sister, Samantha, as well as former classmates and co-stars.

This fictional take on the royal courtship stars Murray Fraser as Prince Harry and Parisa Fitz-Henley as Meghan Markle. According to Lifetime, the movie focuses on Harry and Meghan’s courtship, starting with the day they meet up through “the intense global media attention surrounding their relationship and Meghan’s life as a divorced American actress.” Actors playing Prince William and Kate Middleton get screen time in here, too.

Expect dialogue in the TV movie to include lines like “I don’t need my life to be this perfect royal picture. I just need you.” Watch the trailer above.

This episode of Million Dollar American Princesses will examine how Prince Harry and Markle met and how her story compares to other celebrities who married into royalty , namely Grace Kelly and Rita Hayworth. As Smithsonian explains, this is a “modern royal fairytale that is as much about love as it is about the monarchy’s new attitudes on class, race, acceptability, and tolerance.”

Just in case a few one-hour specials weren’t cutting it, PBS has got the royal fan base covered. The five-part nightly series builds up to the May 19 wedding itself. The episodes will focus on the traditions and celebrations of the wedding, what it means to be a royal bride and all the royal bridal style. American anchor Meredith Vieira will team up with Britain’s Matt Baker as hosts for the special.

NBC’s Inside the Royal Wedding: Harry and Meghan

TIME 100 honorees Savannah Guthrie and Hoda Kotb will host the special that Today describes as a “behind-the-scenes prelude” that gives “an unprecedented glimpse into the fairy-tale romance.” Expect interviews from friends and experts in the fashion, sports and entertainment industries.

HBO’s The Royal Wedding Live With Cord and Tish!

There’s a reason why news anchors “Cord Hosenbeck” and “Tish Cattigan” look familiar. Saturday Night Live veterans Will Ferrell and Molly Shannon reprise their hosting roles as Cord and Tish after “commentating” the Rose Parade on Amazon in January. This time, the two are tackling the royal wedding. The Royal Wedding Live With Cord and Tish! will be produced by Funny or Die, which Ferrell created. Expect nothing less than many tears from Tish and expletives from Cord.

The hours before, during and after Prince Harry and Meghan Markle’s wedding will be all over television sets across the world. Today hosts Hoda and Savannah will begin live coverage at 4:30 a.m. EST. before the 7 a.m. wedding—noon local time. Fellow NBC hosts Megyn Kelly, Kathy Lee Gifford, Al Roker and Sheinelle Jones will also report from England.

CBS’s Gayle King will be joined by Entertainment Tonight‘s Kevin Frazier as they begin coverage at 4 a.m.ET. CBS’ “comprehensive coverage” will begin on Friday, May 18 and continue as the network streams festivities before and after the ceremony. Those without access to a TV can still tune into royal wedding coverage as it will also be broadcast on the radio. The wedding frenzy continues into the evening on CBS as they air Royal Romance: The Marriage of Prince Harry and Meghan Markle at 8 p.m. EST. The show “will take viewers into this thoroughly modern marriage and its impact on the British monarchy.”

MSNBC will report on Prince Harry and Meghan Markle’s wedding from both New York and London. Joy Reid, host of “AM Joy,” will anchor royal wedding coverage in New York beginning at 4:00 a.m. EST. NBC News correspondents Stephanie Ruhle and Katy Tur will be at Windsor.

FOX News’ Shepard Smith and America’s Newsroom anchor Sandra Smith will co-anchor coverage of the wedding ceremony outside of Windsor starting at 6:00 a.m. EST. Ainsley Earhardt will host FOX & Friends from England as well beginning at 5:00 a.m. EST and then join Shepard and Sandra Smith for main wedding coverage. FOX international correspondents join the channel starting on Thursday, May 17.

Other networks airing coverage of the events include Entertainment Tonight and BBC America. Check local listings for more. Here’s when to watch it in every time zone.

According to Variety, British channel ITV will send an “invitation to the Royal Wedding,” which explains what goes into planning a royal wedding as well as behind-the-scenes interviews. In the United Kingdom, the wedding is expected to air on BBC, ITV and Sky News.

People and ABC’s The Story of the Royals

For your withdrawal needs, People and ABC are working together on a two-night special event that revolves around the British line of succession as well as all the excitement from Kensington Palace, including the birth of Prince William and Kate’s third baby, Prince Louis Arthur Charles, and the wedding. According to People, The Story of the Royals “will examine Americans’ ongoing fascination with all things royal” and feature “exclusive interviews with palace insiders.”

And if wedding fever becomes too much, you can always tune into the FA Cup on May 19. 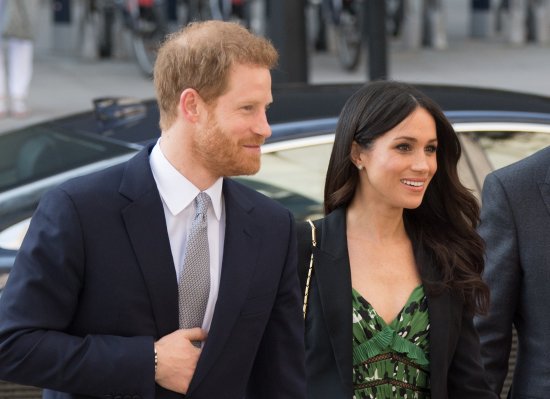