COLUMBUS, OH - APRIL 17: Brett Connolly #10 of the Washington Capitals lines up for a face-off in Game Three of the Eastern Conference First Round during the 2018 NHL Stanley Cup Playoffs against the Columbus Blue Jackets on April 17, 2018 at Nationwide Arena in Columbus, Ohio. (Photo by Kirk Irwin/Getty Images) *** Local Caption *** Brett Connolly
Kirk Irwin—Getty Images
By Ashley Hoffman

A video of a distraught bite-sized hockey fan waiting for a puck from a hockey player turned her into “puck girl,” an instant internet celebrity.

Keelan Moxley, 6, really wanted a puck from Capitals forward Brett Connolly at Sunday’s Game 2. And he really wanted to throw it to her. But the first time the player tried to get her one, another eager boy snatched it up. Connolly tried to get it to her again, but no luck. A man grabbed the second puck, and gave it to another boy.

But the hockey player was not discouraged. She was going to get her puck if it was the last thing he did. She gets one in the end, but her rollercoaster of emotions throughout her bad puck luck was internet gold.

Now the whole experience has the player contemplating gender roles.

“I was like, ‘Oh, I gotta get her another one,” Connolly told reporters Thursday. “And then the same thing [happened], so I kind of looked at the dad and just kind of made a point, I was like, just make sure she gets it. It’s funny. Whatever happened to ‘ladies first,’ you know?”

Perhaps the moral of the story is to never give up.

“I don’t want to get into the dad too much, but I just wanted to make sure she got [a puck] because she was so upset,” Connolly said. “Just had to keep trying until she got one, I guess.

See the video below. 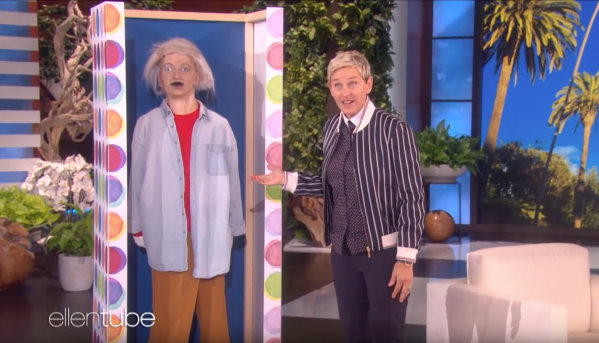 That Animatronic Ellen DeGeneres That Went Viral Is Up For Auction
Next Up: Editor's Pick