'I Wrapped My Arm Around Her.' Southwest Passenger Describes Helping Victim After Engine Explosion

Just as Hollie Mackey was about to get up from her seat to go to the bathroom during Tuesday morning’s Southwest Airlines flight from New York to Dallas, flight attendants asked passengers to stay seated due to continual turbulence. Mackey put her seatbelt back on, shared a glance of disappointment about the bumpy ride ahead with the woman seated at the window to her left and settled back in. Moments later, the unthinkable happened.

Mackey, 42, was seated in the aisle seat on the same row as Jennifer Riordan, a mother of two and bank executive from Albuquerque, New Mexico, who was killed when Flight 1380’s left side engine exploded just 20 minutes into their trip. When debris from the explosion blew out the window next to her, it caused Riordan to be partially sucked out of the aircraft through the gaping hole where the window used to be. Mackey and a teen girl sitting between them immediately came to her aid.

“I grabbed onto Jennifer’s belt loop area and wrapped my arm around her waist, and tried to pull her in. The little girl did, too,” Mackey, an associate professor at the University of Oklahoma, tells PEOPLE.

RELATED: Southwest Passenger Recalls ‘Struggle’ During Deadly Flight: ‘There Was Quite a Bit of Blood’

As the damaged plane traveled hundreds of miles an hour, thousands of feet in the sky, Mackey and the teen held onto Riordan as the cold air and the deafening sound of the aircraft engulfed them.

As hard as they tried, Mackey and the young girl couldn’t pull Riordan back inside.

“It was more of a helpless feeling than anything else,” Mackey says. “With the altitude and that air pressure at that time, we were not physically able to move her at all… the air pressure was still too much.”

Riordan was wearing a seatbelt at the time of the explosion, and Mackey believes it is what kept the 43-year-old from being pulled out of the plane completely. Mackey says she, too, felt the force of the suction drawing her to the window.

“The seatbelt is what held her inside,” she says of Riordan.

Throughout the ordeal, Mackey says she kept her thoughts on helping those around her, and not on what could happen if the plane went down.

“It momentarily crossed my mind it could crash,” she says. “Then I thought, ‘Well, I can’t do anything about that, so I might as well focus on what I can do something about and hope for the best.’ ”

As the aircraft continued its descent to make an emergency landing in Philadelphia, two Texas firefighters who were also passengers helped pull an unconscious Riordan from the window. She was then given CPR by retired nurse Peggy Phillips for almost 20 minutes until the plane touched the ground.

The NTSB believes metal fatigue on the 18-year-old Boeing 737—piloted by hero pilot, Tammie Jo Shults—led to one of the engine’s blade breaking mid-flight, sending shrapnel into the plane’s fuselage and breaking the window next to Riordan.

On Wednesday, the Philadelphia Department of Public Health announced Riordan’s death was caused by blunt impact trauma to her head, neck and torso. Riordan’s family announced Thursday the founding of a memorial website, The Jennifer Riordan Memorial Trust, where givers can support causes that were important to Riordan and help the family meet financial needs after the traumatic event.

“We appreciate the outpouring of support for our family and the love for Jennifer,” the statement, provided to PEOPLE, states. “Hearing stories of how she impacted everyone in so many meaningful ways has truly touched our hearts. To honor her legacy, an official memorial site has been created to fund causes that were near and dear to her heart.”

Later that night after landing in Philadelphia, Mackey took a plane to Dallas and caught a connecting flight back to her home in Norman, Oklahoma, where she reunited with her family. Once there, she was able to reflect on the day’s traumatic events.

Mackey’s thoughts — and her heart — remain focused on Riordan’s family.

“Both of us expected to be going home to our families and sleeping in our own beds that night,” she says. “I kept telling my husband, somebody else’s family doesn’t get to have this tonight, and it isn’t fair.” 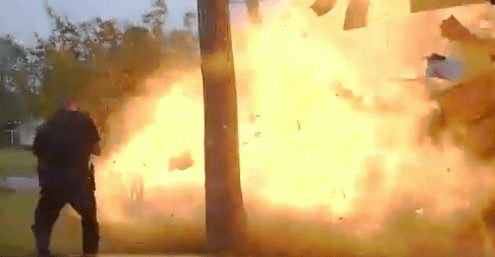