Meet the Founder of Impossible Foods, Whose Meat-Free Burgers Could Transform the Way We Eat

On an otherwise unadorned table at an event space overlooking Hong Kong’s Victoria Harbour, glass bowls displayed the constituent parts of the Impossible Burger. One contained a B-vitamin-laced potato protein paste, another wheat protein, a third a globule of coconut oil. In a fourth, shimmering crimson under the ceiling lights, was the secret sauce: heme (or haem), a component of many proteins, including hemoglobin — the pigment that gives blood its color. It’s also found in the roots of the soybean plant, which is where Impossible Foods extracts it from.

This unassuming display formed a sideshow at Thursday’s international launch of Impossible Foods’ eponymous meat-free burger, which, due to the use of heme, sears, smells, and even bleeds like its animal equivalent. Since the California company begun experimenting with a synthesis of these ingredients in 2011, founder Dr. Pat Brown has attracted over $300 million in funding, drawn an opening salvo from a powerful cattle industry lobby, and has had to rebut suggestions his product is unsafe as he sets about solving what he says is the “most important and urgent problem in the world.”

Read more: Silicon Valley and the Search for Meatless Meat

Brown says he’s not interested in offering vegans another option; instead, he wants to win over omnivores with plant-derived products that are so delicious, nutritious, and affordable they completely replace meat from animals by 2035. Back in the U.S., Impossible Foods has spread to over 1,400 outlets, including the no-frills White Castle burger chain, where a slider sells for $1.99. But gaining a firm foothold in Asia, the world’s largest meat producer and the continent where demand for meat is growing the fastest, will be critical if Brown is to fulfill his mission.

TIME sat down with the Stanford biochemist to talk about food security, climate change, and what it would mean if the world stopped eating meat.

The Impossible Thai Burger by Uwe Opocensky, chef of Beef and Liberty
Aria Chen for TIME

TIME: Impossible Foods wants to completely replace animals as a food production technology by 2035. Are you trying to build a business here, or save the world?

Dr. Pat Brown: Well, it’s both. I decided to found the company because I recognized that the use of animals as a food production technology is by far the most destructive technology on Earth. But we’re not going to address the problem by telling people to change their diet — that’s never going to work. Instead, we have to produce foods that consumers prefer over what they’re getting today from animals. And if we succeed in our environmental mission, we will be the biggest, most impactful business in history.

How environmentally destructive is the meat and dairy industry in its current form?

The use of animals as a food production technology is responsible for more greenhouse gas emissions than the entire transportation system. So, every ferry, car, bus, truck, train, airplane, and rocket ship put together is responsible for less greenhouse gas emissions than using animals to produce food. This technology uses more water and pollutes more water than any other technology by far. It also now occupies almost half of Earth’s entire land area, either for growing crops to feed animals or for grazing land. Livestock has essentially pushed all the diverse wildlife that used to exist on the planet to the edge of extinction. Cows alone far outweigh every other terrestrial mammal left on earth.

There’s some resistance to the idea of our food being engineered. How are you dealing with that?

There is this widely held view that the food that we get today is a product of nature and that Impossible Foods sits at an unusual intersection between science and food. But that’s completely wrong. The human species didn’t begin with a handbook that told it which parts of which plants and animals are healthy and nutritious to eat; that was something that needed to be discovered. Humans needed to figure out how to prepare those foods safely so that they weren’t going to cause fatal infections. And then they needed to figure out how to create foods that bring together delicious, nutritious parts from many plants and animals to create something that’s more than the sum of its parts. That’s research. That’s science. What we are doing is completely in that tradition. We’ve figured out a way to bring ingredients together to make something special that’s more than the sum of the parts.

What can Impossible Foods do to address world hunger and nutritional inequality?

The plant crops that are grown on earth today contain more protein, more calories, more of every essential amino acid, and of every nutrient that you need for good health, than would be required to feed 10 billion people in 2050. But humans have managed to take that abundance of nutrition and create a world where there’s still almost 1 billion people who don’t have enough protein in their diet and almost 2 billion who don’t have enough iron in their diet. That’s because we’ve squandered the nutrition provided by plants by turning it into animals. If Impossible Foods is successful, we solve the world’s biggest environmental problem, solve food security problems, and even reduce conflicts, most of which start over land and water. Compared to using cows to produce beef, our process uses 1/20th the land, a quarter of the water, and it is fundamentally a lot less expensive. That means that when we’ve achieved sufficient scale, we should be able to produce meats that are not only more delicious but more affordable. This will have a huge impact, particularly in places where protein, malnutrition, and iron deficiencies are common.

Tell us what you are working on now. I’ve heard there’s a fish replacement in the works?

Impossible Foods made the decision to start with raw ground beef as our first product because it’s the most popular single kind of meat in the U.S., and it’s iconic. But the technology platform is not at all focused on ground beef. In fact, we’ve learned how to make pork, chicken, and even fish flavors; we’ve figured out the basic chemistry and we have patents on those. Beef is the worst in terms of its destructive environmental impact, but fish is a close second. Right now, humans are absolutely strip-mining the oceans to meet the high demand for fish. The total population of fish in oceans and rivers and lakes is less than half of what it was 40 years ago and some species are down more than 90%. Demand is still going up, so fish is a super high priority for us.

What sort of societal changes might come about from fundamentally changing the nature of the relationship between humans and animals?

Right now, the dominant relationship between humans and animals is exploitative. Replacing animals as a food production technology will absolutely change that. Hopefully, rather than looking at animals essentially as a technology for producing food, we’ll appreciate them more for the role that they play in making this a beautiful planet to live on. The way human history progresses is that things that were commonplace for millennia get replaced by something completely different. Human sacrifice was popular in many religions a millennium ago; the horse went from being essentially the only mode of power transportation 200 years ago to being basically a pet now. The horse was just as deeply embedded in the culture as the cow is today — it took a couple of decades before it was obsolete. Better technology comes along and it’s a new game.

It’s easy to support your mission when we think about exploitative factory farms, but how about the hundreds of millions of small-scale farmers and herders who depend on raising animals?

We certainly don’t want to create hardships for people who depend on raising livestock for a living. But when new technologies come along people who support themselves based on the previous technology adapt. Not to say that there’s no disruption, but people find a new way to make it work. We want to be as constructive as possible. When we are expanding our production, we want to build our production facilities in the same communities that are currently supported by animal-based agriculture and meat production, and we want to do the best job we possibly can in minimizing the unintended consequences. We are competing in the global market, so farmers who are raising livestock for their own subsistence are not going to be affected.

Is our technology going to have a role in interplanetary colonization? Absolutely: it’s going to make it unnecessary. People are seriously talking about going to Mars as the only way to save human civilization from the catastrophic damage that we’re going to do to Planet Earth. Look at a picture of Mars: that is a really sucky planet compared to Earth! No one should ever want to go to Mars. There’s no air on Mars. And yet people are saying we’ve got to figure out a way to get to Mars so we can have a place to live when we’ve totally destroyed this planet. Well, the impact we’re going to have makes it unnecessary to go to Mars by saving this planet and keeping it habitable. We’ve got the best planet in the universe here. Let’s not ruin it. 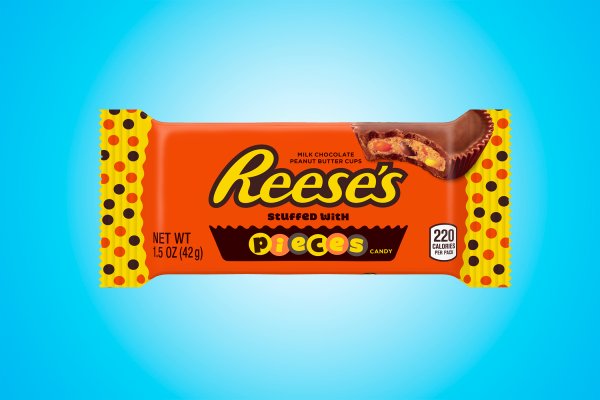 Man's Chocolate Dreams Fulfilled After a Disappointing Piece of Candy
Next Up: Editor's Pick