Jennifer Lopez and Shawn Mendes will perform at the 2018 TIME 100 gala on April 24 — a celebration of TIME’s annual list of the 100 most influential people in the world.

Lopez — currently a judge and executive producer on World of Dance who is winding down a residency in Las Vegas — and Mendes — whose first two albums featured a string of hits and whose third album is expected soon — are both included on this year’s TIME 100 list. They follow John Legend and Demi Lovato, who performed at the gala last year.

“Jennifer Lopez is an iconic performer. She’s the first Latina actor to earn over $1 million for a film and the first woman to have a No. 1 album and a No. 1 movie in the same week. But she’s also a mother, an entrepreneur, an activist, a designer, a beauty icon, a philanthropist and a producer,” actor Kerry Washington wrote in a tribute to Lopez for the TIME 100 issue. “She is an undeniable force and a powerful example — not just for women of color but for anyone who has been made to feel ‘other’ and for everyone who carries the burden and the privilege of being a first.”

John Mayer — who invited Mendes to perform with him during his tour last year — described the 19-year-old as a “pop star born both of and for Generation Z.”

“He doesn’t see genre as a barrier, and he regards all of music as an open playing field, which it very much is for someone with his talent,” Mayer wrote. “His enthusiasm is boundless and infectious, probably because of the fact that he gets better by the day. He’s like Neo in The Matrix, downloading skills in one sitting.” 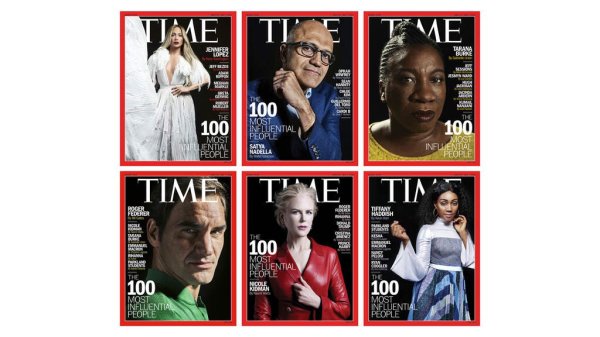