Following the death of former First Lady Barbara Bush, her husband recalled her as “the most beloved woman in the world” and assured grieving Americans their “love and friendship” was helping the Bush family in the hours after her death.

“I always knew Barbara was the most beloved woman in the world, and in fact I used to tease her that I had a complex about that fact,” Bush said in the statement. “But the truth is the outpouring of love and friendship being directed at The Enforcer is lifting us all up. We have faith she is in heaven, and we know life will go on — as she would have it. So cross the Bushes off your worry list.”

Barbara Bush died Tuesday at the age of 92 after she chose not to seek further medical treatment earlier this week.

“I hope you don’t feel sorry for any of us, particularly me,” the 43rd president said at the George W. Bush Presidential Center in Dallas. ” I am at peace with what took place, and the reason why is my mother was at peace for what took place. She believes in an afterlife, and was joyously looking forward to that afterlife.”

The Bush family’s emphasis on ensuring those grieving the death of its matriarch not worry about the ones she left behind comes as politicians, citizens and former Presidents and first ladies share memories and condolences in the wake of Barbara Bush’s death. The spirited, humorous and witty First Lady embraced her characteristics and personality. Dubbed “the enforcer” by her family, Barbara Bush and her husband were married for 73 years — the longest of any presidential marriage in history — and raised George W. Bush, who went on to be President himself and, before that, the governor of Texas, and Jeb Bush, the former governor of Florida. 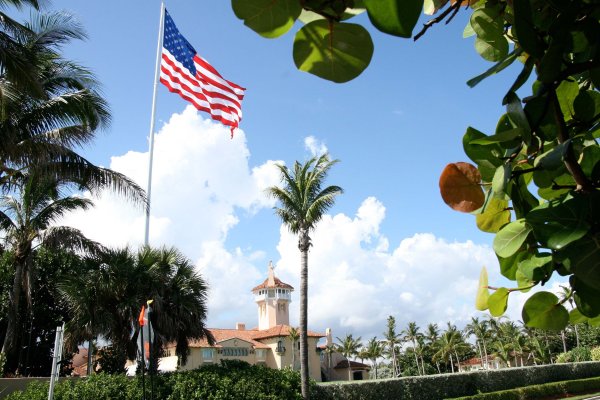 Flag at President Trump's Mar-a-Lago Wasn't Flying at Half-Staff for Barbara Bush
Next Up: Editor's Pick