Photographs by Peter Hapak for TIME
By Wilder Davies

Each year, the TIME 100 Most Influential People includes the artists, activists, leaders and visionaries whose work today will define the course of history in years to come. For 2018, TIME selected Tarana Burke, Roger Federer, Tiffany Haddish, Nicole Kidman, Jennifer Lopez and Satya Nadella to appear in a series of covers for the issue. TIME looked to portrait photographer Peter Hapak to immortalize these iconic figures inside the red border.

Hapak worked with TIME Photo Editor Dilys Ng to create a simple visual theme that served to emphasize each subject’s idiosyncrasies. To unify the images as a series, each person was assigned a particular color for their wardrobe, which, on its own was complementary to the subject, but when viewed across each cover, contributed to a vibrant chromatic spectrum. The black backdrop eliminates any suggestion of time or place, paring the photograph down to essential elements. Hapak cites the painters David Hockney and Lucian Freud as inspirations, especially for the way they invoke “the complexity of simplicity.”

Hapak flew around the country to accommodate each person’s busy schedule, traveling to New York, Los Angeles, Miami, and Washington State to shoot the series. He also worked incredibly fast, with no shoot lasting longer than an hour and ten minutes (the shortest was just 18 minutes). Despite the logistical gauntlet, Hapak says the biggest challenge for him is always creating a space where his subjects feel comfortable. “If you have a creative environment where they feel safe and [you] give the right directions, you can get something out of it,” he tells TIME. “You have to make people forget that there are other people in the studio.” Hapak would even put up walls or curtains to close out his subject from the rest of the crew.

While he strives to cultivate an intimate atmosphere, Hapak’s approach with each person was different, depending on what worked best for them. “Jennifer Lopez was listening to music because she is a performer,” Hapak says, whereas the shoot with Microsoft CEO Satya Nadella was “very silent and intimate.” Pausing between meetings at his office in Redmond, Wash., Nadella was “very concentrated, very aware of what was happening,” Hapak says.

Hapak, who recently shot the TIME cover featuring student activists from Marjory Stoneman Douglas High School, centers his artistic practice on a desire to step back and allow his subjects to appear as they are. “A good portrait photograph is one where I don’t feel the photographer, where I can see the character in the image, where the personality of the image comes through, meaning there is no acting or performance put forward by the photographer to entertain the viewer,” he says. “It doesn’t matter what labels you are using for certain people or what peoples’ professions are; the honesty of the images and the gestures are speaking for themselves.” 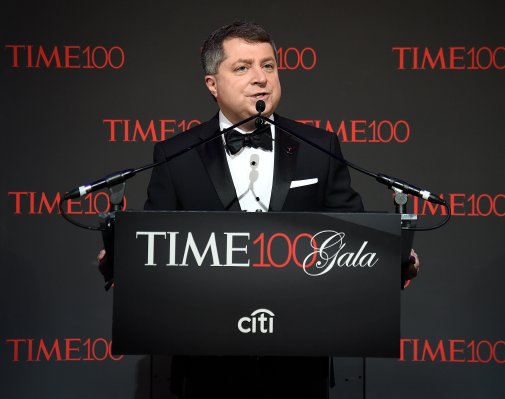 Edward Felsenthal on the Future of TIME and the Power of the TIME 100
Next Up: Editor's Pick