‘I'm Like the Breakup He Can’t Get Over.’ James Comey Talks Trump with Stephen Colbert

Former FBI Director James Comey sat down with Stephen Colbert on The Late Show Tuesday night for a wide-ranging interview to promote his new book A Higher Loyalty.

The late-night comedian kicked off the interview by jokingly asking Comey to pledge his loyalty to him, in reference to when Comey said President Donald Trump had asked for his loyalty last year. Colbert then served Pinot Noir in paper cups — the same wine Comey said he drank on a flight home after he found out from TV news that the President had fired him.

“I thought we could create that happy moment for you right now,” Colbert said.

The interview quickly moved on to Trump and his tweets.

Comey said that his first reaction to the tweets is to shrug, but he then said that such a collective reaction could be dangerous. “It’s not ok,” he said. “There’s a danger we are now numb to it and the norm has been destroyed.”

In his new memoir, Comey describes Trump as “untethered to the truth” and, in a recent interview with ABC News, said he was “morally unfit” to be president.

When Colbert asked Comey if it’s possible for Trump to turn that image around, Comey said “I wouldn’t be optimistic.” Comey explained that he thought Trump’s leadership style was “strikingly similar” to a mob.

“It’s all about the boss, what will serve the boss best,” Comey said. “That reminds me very much of Cosa Nostra leadership.”

“Well if it felt like you were working for a mob boss, were you surprised that you got whacked?” Colbert joked in reference to his firing. “That’s what they do!”

Comey said he was in fact surprised he was fired as FBI director while he was spearheading the investigation into alleged Russian interference in the 2016 election.

“I thought, I’m leading the Russia investigation. Even though our relationship is becoming strained, there’s no way I’d be fired … that’s a crazy thing to do,” Comey said.

After a half an hour, Comey ended the interview on a positive note. Describing the President as a “forest fire,” he said that “forest fires allow things to grow that couldn’t grow before.”

“We will thrive and rebalance ourselves in the wake of this,” he said. 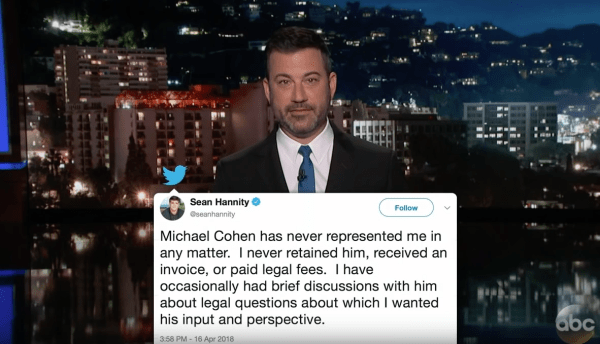