'Larry Was a Monster.' Gymnast McKayla Maroney Speaks for the First Time About Sexual Abuse by Team Doctor

Olympic champion McKayla Maroney is speaking publicly for the first time about the sexual abuse she experienced by gymnastics team doctor Larry Nassar.

“We know Larry was a monster,” she said at a luncheon for the New York Society for the Prevention of Cruelty to Children (NYSPCC), in an on-stage discussion with the group’s executive director Mary Pulido. “I never should have met him.”

Maroney is one of four members of the Fierce Five U.S. women’s gymnastics team that won gold at the London Olympics in 2012. In October 2017, she was the first of her teammates to reveal, in a tweet, that she was abused by Nassar. Since then, her teammates Aly Raisman, Gabrielle Douglas and Jordyn Wieber have also said they were sexually abused by Nassar. USA Gymnastics allowed Nassar to accompany the team to World Championships and Olympic competitions as well as monthly training sessions held at the Karolyi ranch, the national training center, in Houston, Tex.

Raisman and Wieber appeared at Nassar’s sentencing hearing in January to make victim impact statements, and Maroney submitted a written statement as well. While Nassar is currently serving 175 years in prison on state and federal charges of criminal sexual behavior; the president of USAG and USOC at the time have resigned; and USAG no longer holds training sessions at the Karolyi ranch, Maroney and her Fierce Five teammates say more needs to be done to ensure that the culture of ignoring and not acting on complaints of sexual abuse, not just by a national team doctor but by any adult working with gymnasts in any gym, is changed. “We can’t have blind faith in institutions any more,” she said, calling on USA Gymnastics to “completely rebuild and start over” in order to ensure the safety of gymnasts.

Echoing criticism her teammates have launched at those who failed to protect them from Nassar, in her first public remarks Maroney called out USA Gymnastics, the sport’s national governing body, the U.S. Olympic Committee (USOC), and Michigan State University (MSU), where Nassar was also on the faculty, for failing to take responsibility for Nassar’s abuse. In a lawsuit Maroney filed against USA Gymnastics, USOC, MSU and Nassar, she also revealed that USA Gymnastics paid a settlement to her and her family to resolve her complaints about Nassar.

“They demanded excellence from us but didn’t give it to us,” Maroney said at the luncheon of those organizations. “The team won gold in spite of USA Gymnastics, the USOC, and MSU. They don’t build champions, they break them. We need to change that.”

Maroney said she was inspired to open up about her sexual abuse by the #MeToo movement, which was catalyzed by women coming forward about sexual abuse they experienced by Hollywood producer Harvey Weinstein. “I felt this was my moment, and having competed at the Olympics, I almost felt it was my duty to come forward so gymnasts in the future don’t need to struggle and deal with the repercussions of sexual abuse,” she said.

As a gymnast, “I was taught that I wasn’t supposed to say anything,” she said about her years of silence about the abuse she said began when she was 13 years old and continued until she left competitive gymnastics in 2016. Speaking up about her experience, she said, was like “lifting a weight off my shoulders. I don’t think there is anything more freeing.”

During the years of abuse, she said her parents “didn’t know at all,” since she trusted Nassar and USA Gymnastics, and believed they were looking out for her best interests and helping her fulfill her dream of competing at the Olympics.

Maroney described how the abuse has affected her life, saying that she is healing “day by day,” and at times questions whether her gymnastics career was worth the price of becoming a victim of sexual abuse. But, she continued, “If there is one thing gymnastics teaches you, it’s that you get up when you fall. We can’t give up [the fight] to end sexual abuse.” 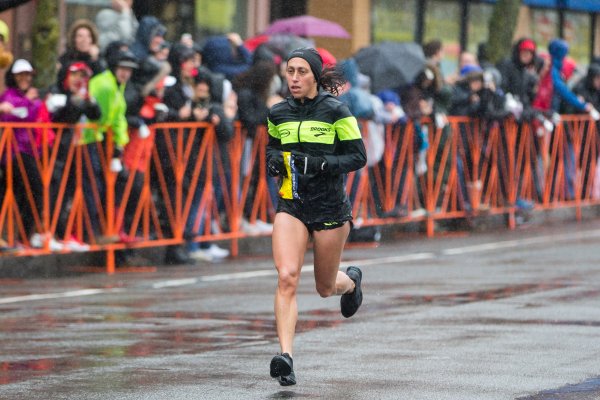 Boston Marathon Winner on How She Nearly Quit — and Why She Slowed Down for Her Competitor's Bathroom Break
Next Up: Editor's Pick