Starbucks Is Closing 8,000 Stores for Racial Bias Training After the Arrest of 2 Black Men

Protestors demonstrate outside a Starbucks on April 15, 2018 in Philadelphia, Pennsylvania.
Mark Makela/Getty Images
By Katie Reilly

Starbucks will close more than 8,000 stores for one afternoon next month to hold racial bias trainings after two black men were arrested while waiting at a Philadelphia location, an incident that has prompted protests and calls to boycott the coffee giant.

More than 8,000 company-owned stores will close on the afternoon of May 29 to provide the training to nearly 175,000 employees, the company said in a press release on Tuesday. The training will “address implicit bias, promote conscious inclusion, prevent discrimination and ensure everyone inside a Starbucks store feels safe and welcome,” per the company’s statement.

The two men were arrested on Thursday after Starbucks employees called 911 to report them for trespassing when they asked to use the restroom but were denied because they had not yet purchased anything, according to police. Their arrest was filmed by another patron, who said the men were waiting for a friend to arrive. The store manager involved in the situation no longer works at that Starbucks location, a spokesperson said.

“While this is not limited to Starbucks, we’re committed to being a part of the solution,” Starbucks CEO Kevin Johnson said in a statement.

“Closing our stores for racial bias training is just one step in a journey that requires dedication from every level of our company and partnerships in our local communities.”

The training curriculum will be designed by civil-rights leaders and experts on combatting racial bias, including former U.S. Attorney General Eric Holder; Bryan Stevenson, founder and executive director of the Equal Justice Initiative; and Sherrilyn Ifill, president and director-counsel of the NAACP Legal Defense and Education Fund. 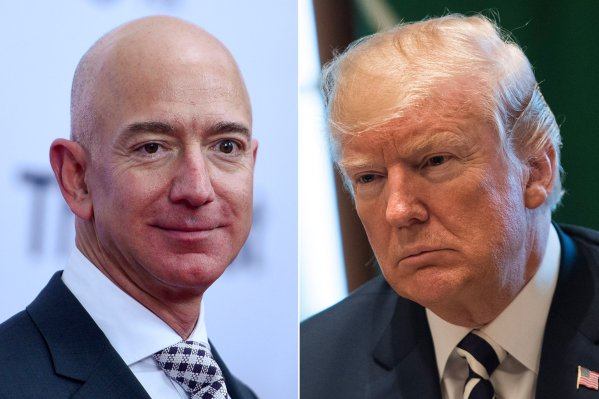 Trump's Attacks Against Amazon Continue
Next Up: Editor's Pick