Robert De Niro is a very good actor. So good, in fact, that he completely flummoxed Jimmy Fallon into believing he had never encountered a dog before. (Or a labradoodle, for that matter.)

During a visit to Fallon’s Tonight Show to help promote the upcoming Tribeca Film Festival, which De Niro founded in 2002 with film producer Jane Rosenthal of and is celebrating its 17th year this spring, the cameras followed Fallon and DeNiro as they chatted and strolled down the back hallways of Rockefeller Center, where the show is filmed. Everything seems to be going fine, up until they walk by a few people hanging out with a puppy.

“What’s… what’s that?” De Niro stops to ask, utterly befuddled by the fuzzy creature in front of him.

“Uh, I think it’s a labradoodle,” Fallon tries to explain.

“Well, usually rabbits aren’t so big,” De Niro continues the conceit. As Fallon tries unsuccessfully to get to the bottom of this most unusual of knowledge gaps, De Niro remains perfectly impassive — and very much in character as De Niro. (He even references his wariness around pets thanks to a certain “cat betrayal” in his past, a reference to the classic comedy Meet the Fockers, of course.)

Watch Fallon try to handle the situation, above. 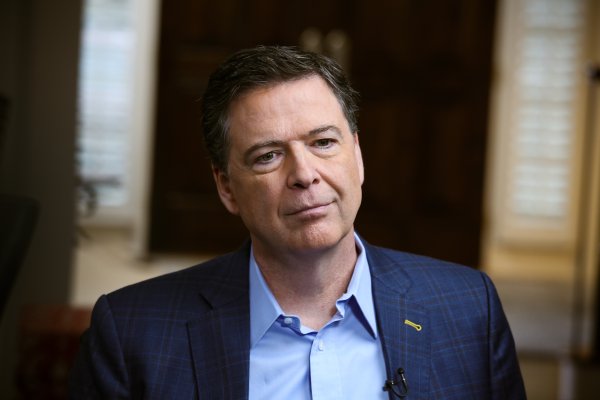 James Comey Compared President Trump to a Mafia Boss. Stephen Colbert Took It From There.
Next Up: Editor's Pick