Who Is Kimba Wood? Meet the Federal Judge Overseeing the Michael Cohen Case

As the federal judge in charge of a highly watched case, Wood already made a splash when she ordered Cohen’s attorney on Monday to reveal that he had Fox News host Sean Hannity as a client.

But she’s no stranger to high-profile situations.

Here’s what you need to know about Judge Kimba Wood.

Who is Judge Kimba Wood?

Wood, 74, is a U.S. District Court judge with sterling credentials who has served since 1988.

Some of her most high-profile cases include the 1990 trial of junk-bond king Michael Milken, in which she sentenced him to 10 years on six felony convictions (she later reduced the sentence); a 2000 case in which she sentenced the first CEO of a Wall Street investment bank charged with insider trading; and a 2010 case in which 10 Russian spies pleaded guilty to being illegal foreign agents, “setting in motion the largest swap of espionage prisoners between the United States and Russia since the Cold War,” according to the Boston Globe. She recently presided over the corruption trial of former New York legislative leader Dean Skelos.

Wood has degrees from Harvard Law School and the prestigious London School of Economics, and she spent 20 years in private practice, mostly at Wall Street Firm LeBoeuf Lamb, Leiby & MacRae, where she specialized in antitrust, employment and commercial law, according to a Chicago Tribune article from 1993.

She’s also had some colorful moments in her personal life. While studying at the London School of Economics, she spent five days training to be a Playboy bunny. She also was tagged by New York tabloids as the “Love Judge” after the wife of a multimillionaire Wall Street financier during a contentious divorce found a diary in which he wrote passionately about her.

What happened when Wood was nominated to be Attorney General?

Wood was nominated by President Bill Clinton to be Attorney General in 1993, but she was forced to withdraw.

She was Clinton’s second pick for the position, but his first choice — Zoe Baird — had to withdraw after it was revealed that she had not followed all applicable laws when hiring an undocumented nanny. Wood had also hired an undocumented nanny, but she had paid the proper taxes and at the time it was a legal hiring choice. But the cases were too similar — with TIME calling it “awful deja vu.”

“Again, a woman withdrew her name from consideration for the post,” TIME wrote of Wood. “Again, the conflict involved an illegal alien. Again, an acute embarrassment for the Clinton Administration. For the second time in two weeks, a respected woman with a high-profile career watched her reputation shredded by a brutal vetting process. Unlike Baird, Wood had broken no laws; the dilemma for the Clinton Administration was that the circumstances faintly echoed the previous case.”

In a subsequent piece, TIME noted the whiff of sexism in how Wood’s nomination was treated.

“‘Do you have a Zoe Baird problem?”” TIME wrote in 1993. “That was the question that brought down Kimba Wood as a candidate for Attorney General (even though her answer was ”No’) … After the President’s political advisers determined that Americans are too dumb to understand the difference between Zoe Baird, who knowingly violated the law by employing two illegal aliens and paying them off the books, and Kimba Wood, who legally employed an alien and filed all the required taxes, they discovered that — oops! — they had inadvertently created a new hiring policy. Worse, its effect looked suspiciously like sex discrimination.”

Why is she in the news now?

Wood is the judge handling the question of how to deal with the records seized in the FBI raid of Trump’s personal attorney Cohen.

On Monday, she did not make a final decision on whether to appoint an independent third party, called a “special master,” to first sort through the documents seized in the raid and determine what should be protected by attorney-client privilege. But she did say Cohen’s legal team had to release the name of his secret “third client,” which was then revealed to be Hannity. 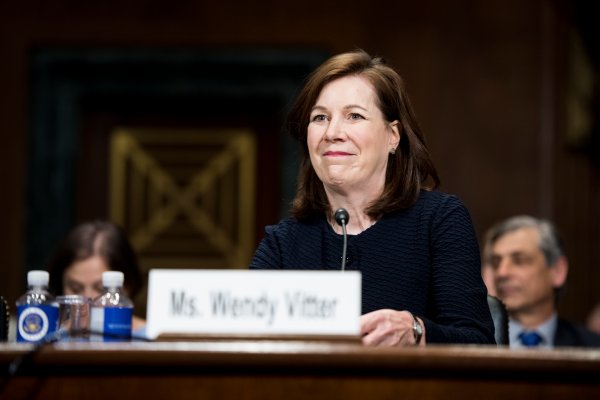 Trump Judicial Nominee Won't Say If She Supports Brown v. Board of Education
Next Up: Editor's Pick