The runner who became the first American woman to win the Boston Marathon in 33 years was very close to quitting on Monday.

Desiree Linden, who secured her first-ever big marathon win when she crossed the finish line in 2 hours, 39 minutes and 54 seconds, told ABC’s Good Morning America Tuesday that she wasn’t feeling well early on in the race and was getting fed up with the miserable weather. Instead, she said, she planned to do what she could to help the other Americans on the course.

So when fellow American Shalane Flanagan, the 2017 New York City Marathon winner and a favorite to win in Boston, had to pull off to use the porta-potty mid-race, Linden slowed her pace to help Flanagan return to the pack when she was finished.

“We closed the gap and we were back in it,” Linden told GMA, sitting next to Flanagan. “It was a great turning point for me, and kept Shalane in it and gave us a chance.”

Earlier on in the race, Linden said she told Flanagan she wasn’t feeling well and could help block the wind for her or pace her. “I grabbed her shoulder and was like, ‘Are you OK?’ ” Flanagan told GMA.

Analysts applauded Linden for displaying immense sportsmanship — especially in a race that practically every professional distance runner dreams of winning and while running amid unusually harsh weather conditions.

“A ton of American pride on the line,” Linden said. “So it was just keeping our best people in the front.”

Linden went on to pull away from the chase pack and take the lead from Ethiopian runner Mamitu Daska. When she crossed the finish line several miles later, there were no other runners in sight.

“When you work together, you never know what’s going to happen,” Linden told NBC Sports after the race. “Helping her helped me.”

Linden’s hope for American dominance in the women’s field in the marathon went beyond her first-place finish. Seven American woman finished in the top 10, including Sarah Sellers, a full-time nurse who shocked the world with a second-place finish. Flanagan went on to secure a seventh-place finish, and told Runner’s World the 2018 Boston Marathon was likely her last. 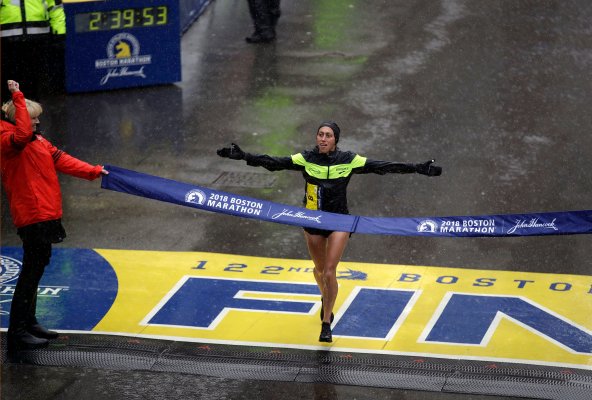