BTS poses in the press room at the 2017 American Music Awards at Microsoft Theater on November 19, 2017 in Los Angeles, California.
Jason LaVeris—FilmMagic/Getty Images
By Raisa Bruner

K-pop group BTS can add another accolade to their list of successes: winner of the 2018 TIME 100 reader poll. The seven-person group of multitalented South Korean artists has been tapping a vein of global popularity since 2013. The group has topped Billboard‘s Social charts for almost all of 2017 and 2018 (so far), won the Top Social Artist title at last year’s Billboard Music Awards, earned a spot on TIME’s list of the Most Influential People on the Internet in 2017 and regularly spark social media trends, thanks to their 14-million-strong “Army” of fans.

BTS, which consists of singers RM, Jin, Suga, j-hope, Jimin, V and Jungkook, is just one of a number of K-pop groups with massive fanbases. But in particular they have proven themselves capable of transcending the Asian market with their hip-hop-meets-pop songs, sharp choreography and high-concept music videos. Their next full-length album, Love Yourself: Tear, is due out on May 18.

“We came together with a common dream to write, dance and produce music that reflects our musical backgrounds as well as our life values of acceptance, vulnerability and being successful,” RM told TIME in 2017, noting that their powerful online presence is a “team effort.” “Music transcends language,” he added.

While TIME editors are responsible for selecting the TIME 100, the online reader poll opens up voting to the general public. BTS — which stands for “Bangtan Sonyeondan” or “Beyond the Scene” — easily dominated this year’s poll, garnering over 15% of the vote. Runners-up included South Korean President Moon Jae-in with five percent and Barack Obama with three percent. Other popular musical acts, including Rihanna, Beyoncé, Shawn Mendes and Bruno Mars, brought in two percent each.

In 2017, Philippine president Rodrigo Duterte was the winner of the reader poll, racking up 5% of the online vote. The official TIME 100 will be announced April 19 on TIME.com.

Correction: The original version of this story misstated the English version of “BTS.” It’s “Beyond the Scene,” not “Behind the Scene.” 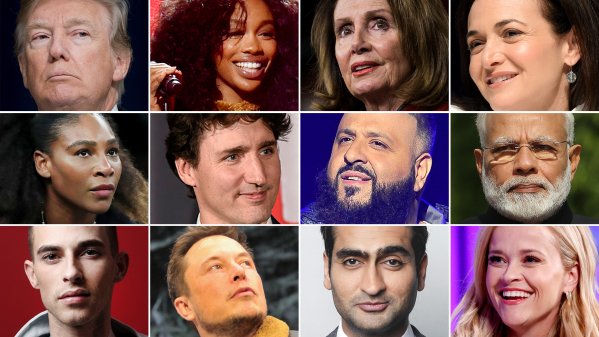