Jimmy Kimmel went to Coachella this weekend to let Eminem respond to a few mean tweets.

The late night talk show host showed up for the rapper’s headlining performance via screens on Coachella’s main stage. “I love Eminem but not everyone does,” Kimmel said, introducing one of his infamous segments where celebrities read mean tweets about themselves, this time focused entirely on Eminem. According to The Guardian, the rapper’s on-stage emcee read the tweets aloud for the crowd. “No one’s been paying attention to you since 2003,” read one. The rapper took the criticism surprisingly well. “He kinda has a point,” Eminem replied in response to a tweet that asked, “Remember when Eminem was actually dope?”

While not every celebrity gets a chance for a rebuttal to the mean tweets highlighted on Kimmel’s show, Eminem jumped at the chance, asking the crowd, “Coachella, can I take you back to a time when I was actually good?” He then launched into a set that took fans on a trip down memory lane, complete with throwback hits like “My Name Is” and “The Real Slim Shady.” When he hit the line, “Dr Dre’s dead. He’s locked in my basement,” Eminem brought the legendary rapper on stage. “Y’all know who that is?” says Eminem, pointing at Dre. “I know y’all did not forget who this man is.”

Dre, the rapper-turned-Beats mogul, joined his protégé for hits like “Still Dre”, “Nuthin’ But a G Thang” and, of course, “Forgot About Dre,” in a set that wouldn’t provide fodder for any more mean tweets. 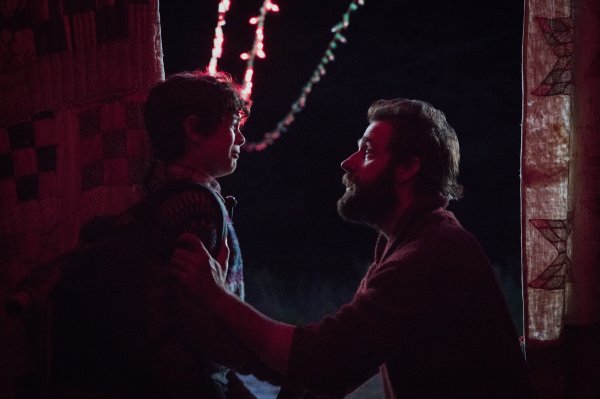 Jimmy Kimmel’s In-House Movie Critic Gives Us the Real Scoop on John Krasinski's A Quiet Place
Next Up: Editor's Pick