More than half of the sponsors of ads on Facebook that featured divisive political messages ahead of the 2016 presidential election have little or no public paper trails, according to a study from researchers at the University of Wisconsin-Madison.

One-sixth of those ad buyers with little background information were linked to Russia, according to the study released Monday. Researchers examined 5 million ads encountered from Sept. 28 to Nov. 8, 2016, by about 9,500 volunteers, who were chosen to represent the demographics and partisan affiliations of U.S. voters. The ads were captured by special software in the participant’s web browsers.

Researchers said the study is the first widespread examination of digital political advertising, and comes as Facebook Inc. faces increased congressional scrutiny and potential regulation of its business model and policies.

Young Mie Kim, the study’s lead author, and her team found that a quarter of the Facebook ads that were examined mentioned candidates. Some of them drew attention to candidate scandals including Donald Trump’s remarks about women on the Access Hollywood tape or Hillary Clinton’s use of a private email server for official business while she was Secretary of State. The rest focused on controversial subjects such as abortion and guns.

Though most of the ads didn’t mention candidates, many echoed themes raised by the them, the researchers found.

“Some of these ads are very deliberate, using a candidate’s particular issues without using the candidate’s name,” said Kim, a professor in the school of journalism and mass communication at the University of Wisconsin-Madison.

Federal laws require sponsors of political ads on television, cable, satellite and radio to disclose information to the Federal Election Commission and the Federal Communications Commission. But they don’t apply to issue ads bought on online platforms like Facebook, even those that mention candidates. The FEC requires sponsors of ads to disclose spending on digital advertising only if they include language calling for the election or defeat of a federal candidate.

The study found that ads were targeted to battleground states, with Pennsylvania and Wisconsin, both of which Trump won by less than 1 percentage point. It found that ads on immigration were disproportionately targeted to white voters. Because digital ads can be directed to specific individuals and, unlike broadcast ads, cannot be viewed by the general public, efforts by election officials to monitor those ads are almost impossible.

Kim and her team, called Project DATA, focused on about 50,000 Facebook ads that fell into eight issue areas. Of the 228 groups that purchased those ads, they labeled 122 “suspicious.” The researchers could find no publicly available information about them in FEC filings, nonprofit records from the Internal Revenue Service, the groups’ own websites or from other sources.

One group in that category, the Catholic Association, ran negative ads claiming Clinton was hostile to religion. Other than the Facebook buyer, the only group with that name that researchers could identify was a 19th century Irish movement, the study said.

Last November, the U.S. House Intelligence Committee released Facebook ads purchased by Russia. The researchers used that finding and other information to determine that 19 of the 122 suspicious sponsors they identified were Russian.

One of the Facebook ads claimed that 300,000 veterans died waiting for treatment while illegal aliens received $1.1 billion in taxpayer-funded health care.

While sponsors of such ads aren’t required to disclose their spending online, a bipartisan measure proposed to address the gap, called the Honest Ads Act, would require Facebook and other online platforms to report the buyers of such ads to the Federal Election Commission.Facebook endorsed the act last week and had previously announced its own effort to make political ads more transparent, including a feature that would allow users to see all the ads bought by a particular sponsor.

The peer-reviewed study was jointly released by the Campaign Legal Center in Washington and Issue One, a group that advocates for changes in the nation’s election laws. It will be published in a forthcoming issue of the journal Political Communication. 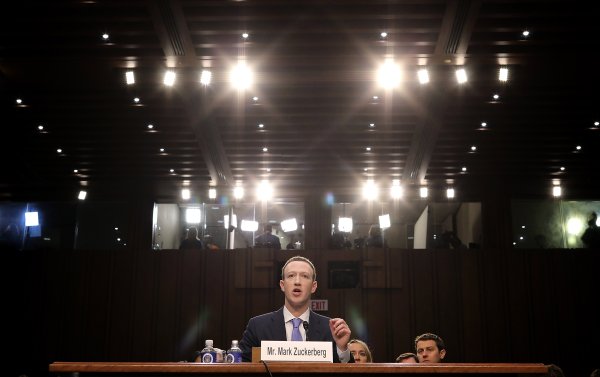 Mark Zuckerberg Survived Congress. Now Facebook Has to Survive the FTC
Next Up: Editor's Pick