With Bravado, the Syrian Government Responds to U.S.-Led Attacks

At 9 a.m. exactly, the Twitter account of the Syrian presidency posted a video of Bashar al-Assad leisurely walking in to work, soft spring light behind him and briefcase in hand.

Since earlier Saturday, state television showed peaceful scenes in Damascus, home to at least one of the targets of this morning’s airstrikes on Syria. Civilians flashed the victory sign with their hands as they passed the camera.

A Syrian army spokesperson appeared saying that “air defence systems effectively blocked the aggressor’s rockets,” shooting most of them down, despite the Pentagon saying that more than 100 rockets hit their targets, in the first coordinated Western military intervention against the Syrian government.

“Three major powers have just wasted millions of dollars and surely days of planning for nothing,” said Rami Nameh, an accountant from his home in the city of Homs. “This attack won’t change anything.”

Last April, the U.S. sent cruise missiles into an airbase in Homs province after a sarin attack on the town of Khan Sheikhoun that killed more than 80 people. A few days later, planes were again taking off from the base.

Like others, 21-year-old student Hiba Idriss woke up to the thud of the air defense systems in Damascus early Saturday morning.

“Those 100 plus missiles that were fired against Syria today will have the same effect on our country as last year’s 58 tomahawks had: nothing,” said Idriss from her home in the Mezzeh neighbourhood of the capital.

“I watched what happened,” said Mohammed of the strikes. He didn’t want to give his last name, fearing reprisal from the government. A medical student, he treated victims of the alleged chemical attack on Douma. “We thought the response would have been bigger.”

Syria, and its ally Russia, have denied the government used chemical weapons in Douma and said the opposition fabricated the attack to stave a government victory in the eastern Ghouta suburbs of Damascus.

After an attack on eastern Ghouta in 2013 that killed more than 1,000 people, Assad agreed to give up all his chemical weapons as then U.S. President Barack Obama threatened military actions. But the UN has documented dozens of chemical attacks since then and opposition activists claim the government has carried out hundreds of attacks with chlorine, which isn’t illegal to possess but is prohibited for use as a weapon. However, it has been used repeatedly in Syria with little more than condemnation from the international community.

President Assad has now claimed victory in eastern Ghouta, pushing the rebels into the shrinking territory they control in the north.

“President Assad is winning, we all were witnesses to this fact,” said Idriss. “Even the opposition could see that the Syrian Arab Army is winning.”

Demonstrators took to the streets of the capital against the strikes, hoisting Syrian flags and pictures of President Assad. In what looked more like celebrations than protests, some danced alongside Syrian soldiers in the streets.

“Look around you,” one man told a reporter. “Life is normal. Where are Trump’s genius missiles?”

A small girl sung a patriotic song while she held the Syrian flag.

“We should teach our children the importance of our victories,” said the reporter addressing the camera, “and our strong stand against this aggression.”

The station also showed police officers ready to enter Douma, as the last of the opposition was evacuated from the area. The rebel group that controlled the town made a deal to surrender in return for safe passage out, just hours after the alleged chemical attack on April 7.

For many in Syrian opposition, and for those who suffered the chemical attack one week earlier, the strikes were welcomed, but not enough.

Like thousands of others in the town, the medical student, Mohammed, has now been evacuated north to areas under rebel control as the government retakes the eastern Ghouta suburbs. Mohammed says he doesn’t think the strikes will have any impact unless they come along with an enforced agreement to remove all chemical weapons from Syria. The U.S. says it has crippled Syria’s chemical weapons program, but Mohammed says the strikes were too little, too late.

“We won’t forget that we lost our city and our homes,” said Mohammed. “And maybe we will never go back to Douma.” 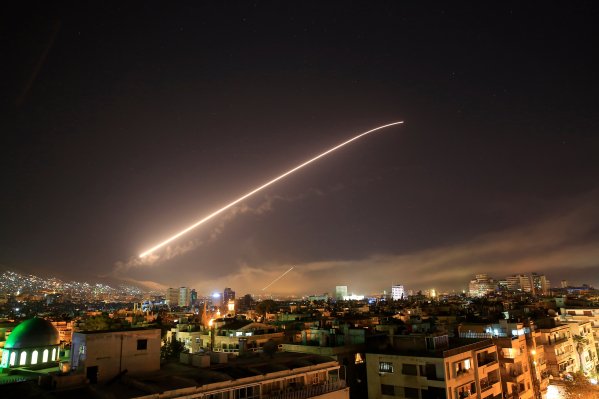 What Happens Next in Syria?
Next Up: Editor's Pick