The operation, which was fairly limited in its scope, opens a perilous new chapter in the Syrian civil war and risks dragging the U.S. further into the blood-soaked conflict, now in its eighth year.

The military strikes carried out by warplanes and warships belonging to the U.S., France, and Britain also escalated diplomatic tensions with Russia and Iran, Assad’s largest allies, which later lashed out against what they deemed as unnecessary military aggression.

President Donald Trump, speaking from the White House in a nationally televised address, announced he ordered “precision strikes” with U.S. allies as retaliation for the apparent April 7 chemical attack on the western Syrian town of Douma, in which dozens of civilians were killed.

“This massacre was a significant escalation in a pattern of chemical weapons use by that very terrible regime,” he said. “The evil and despicable attack left mothers and fathers, infants and children thrashing in pain and gasping for air. These are not actions of a man; they are crimes of a monster instead.”

The Administration, however, did not present public evidence on the type of chemicals used or whether it involved the use of a powerful nerve gas – a violation of Trump’s “red-line” announced last year. Defense Secretary James Mattis told reporters at the Pentagon that the U.S. was confident that chlorine was used, but couldn’t “rule-out” that the deadly nerve agent sarin was launched.

It remains unclear why the U.S. would unleash military strikes from the air and by sea if it did not have irrefutable proof that nerve agent was used. Assad has launched chlorine attacks against civilians dozens of times without U.S. reprisal, even though chemical weapons have been internationally banned after widespread use in World War I.

This time, volleys of Tomahawk cruise missiles roared in from U.S. warships in the Mediterranean Sea while fighter jets launched airstrikes on Syrian military control centers and chemical weapons facilities. Syrian residents posted video and images of explosions lighting the night sky. No U.S., British, or French casualties were reported.

The strikes targeted several military sites around Damascus and Homs that were used to manufacture chemical weapons. Mattis described a limited, one-time strike designed to deter Assad from using chemical weapons again. But an hour earlier, Trump laid out a longer-term engagement, saying the U.S. would “sustain this response” unless the chemical attacks came to an end.

“The purpose of our actions tonight is to establish a strong deterrent against the production, spread, and use of chemical weapons. Establishing this deterrent is a vital national security interest of the United States,” Trump said. “The combined American, British, and French response to these atrocities will integrate all instruments of our national power — military, economic, and diplomatic.”

The airstrikes sought to hobble Assad’s capabilities while avoiding striking Russian and Iranian troops and equipment that are entwined the Syrian military in many parts of the country. Trump called out Syria’s allies, Russia and Iran, for “supporting, equipping, and financing” Assad’s forces. The president, who has said repeatedly he would like to improve relations with Russian President Vladimir Putin, had sharp words the support for the Syrian government.

“What kind of nation wants to be associated with a mass murderer of men, women and children?” he said, adding that Russia must decide if it will “continue down this dark path,” or join “civilized nations” as force for peace.

President Trump addresses the nation on the situation in Syria at the White House on April 13, 2018.
Mandel Ngan—AFP/Getty Images

The operation marked the second time the U.S. struck Assad’s military. Trump ordered an attack last April against the Shayrat air base after a warplane at the base dropped bombs on another town allegedly containing the nerve agent sarin. U.S. warships launched 59 Tomahawk cruise missiles at the base. “Clearly, the Assad regime did not get the message last year,” Mattis said. “This time, our allies and we have struck harder. Together, we have sent a clear message to Assad, and his murderous lieutenants, that they should not perpetrate another chemical weapons attack for which they will be held accountable.”

Mattis, who spoke alongside Chairman of the Joint Chiefs of Staff Gen. Joseph Dunford and representatives of the French and British military, said that more than 100 weapons were launched against three main targets. He did not specify how the targets were hit, but stressed that the operation did not pose danger to surrounding civilians.

The plan came together after several meetings of the National Security Council following images shared on social media of the Douma attack that showed lifeless bodies of children, eyes open, sprawled on the ground with foam bubbling from their mouths as they gasped for air.

It is an abrupt reversal for Trump. Just last week, the president indicated he wanted to pull out American forces fighting ISIS from Syria. The country has been engulfed in fighting since 2011, when civil unrest tied to the Arab Spring movement escalated into a full-blown rebellion against Assad.

He responded with brutal force, and with the assistance of allies Russia and Iran. Approximately 350,000 people have been killed in the fighting, according to the Syrian Observatory for Human Rights.

With Brian Bennett in Washington 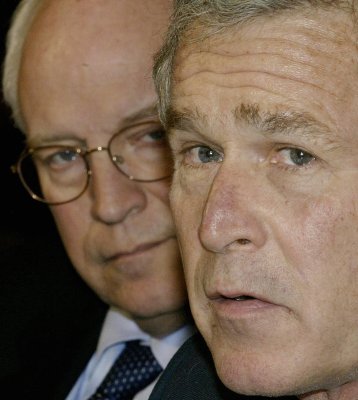 George W. Bush Never Pardoned Scooter Libby and It Broke His Relationship With Dick Cheney
Next Up: Editor's Pick