President George W. Bush speaks to reporters during a meeting with economists in the Roosevelt Room of The White House as Vice President Dick Cheney looks on in Washington, on Jan. 30, 2004.
Luke Frazza—AFP/Getty Images
By Massimo Calabresi and Michael Weisskopf

Editor’s note: The following is an excerpt from the Aug. 3, 2009 TIME cover story “The Final Days of Bush and Cheney.” On Friday, President Donald Trump granted a full pardon for I. Lewis (Scooter) Libby, saying “for years I have heard that he has been treated unfairly.”

Hours before they were to leave office after eight troubled years, George W. Bush and Richard B. Cheney had one final and painful piece of business to conclude. For over a month Cheney had been pleading, cajoling, even pestering Bush to pardon the Vice President’s former chief of staff, I. Lewis (Scooter) Libby. Libby had been convicted nearly two years earlier of obstructing an investigation into the leak of a covert CIA officer’s identity by senior White House officials. The Libby pardon, aides reported, had become something of a crusade for Cheney, who seemed prepared to push his nine-year-old relationship with Bush to the breaking point–and perhaps past it–over the fate of his former aide. “We don’t want to leave anyone on the battlefield,” Cheney argued.

Bush had already decided the week before that Libby was undeserving and told Cheney so, only to see the question raised again. A top adviser to Bush says he had never seen the Vice President focused so single-mindedly on anything over two terms. And so, on his last full day in office, Jan. 19, 2009, Bush would give Cheney his final decision.

These last hours represent a climactic chapter in the mysterious and mostly opaque relationship at the center of a tumultuous period in American history. It reveals how one question–whether to grant a presidential pardon to a top vice-presidential aide–strained the bonds between Bush and his deputy and closest counselor. It reveals a gap in the two men’s views of crime and punishment. And in a broader way, it uncovers a fundamental difference in how the two men regarded the legacy of the Bush years. As a Cheney confidant puts it, the Vice President believed he and the President could claim the war on terrorism as his greatest legacy only if they defended at all costs the men and women who fought in the trenches. When it came to Libby, Bush felt he had done enough.

But the fight over the pardon was also a prelude to the difficult questions about justice and national security inherited by the Obama Administration: How closely should the nation examine the actions of government officials who took steps–legal or possibly illegal–to defend the nation’s security during the war on terrorism? The Libby investigation, which began nearly six years ago, went to the heart of whether the Bush Administration misled the public in making its case to invade Iraq. But other Bush-era policies are still coming under legal scrutiny. Who, for example, should be held accountable in one of the darkest corners of the war on terrorism–the interrogators who may have tortured detainees? Or the men who conceived and crafted the policies that led to those secret sessions in the first place? How far back–and how high up the chain of command–should these inquiries go? 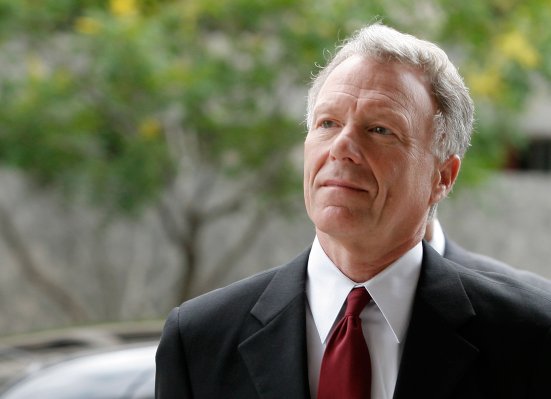 Why Scooter Libby Didn't Get a Presidential Pardon Until Just Now
Next Up: Editor's Pick