The Oklahoma Teacher Strike Has Ended – Here's What They Got. And What They Didn't

Thousands rallied at the Oklahoma state Capitol building during the third day of a statewide education walkout on April 4, 2018 in Oklahoma City, Oklahoma.
Scott Heins/Getty Images
By Katie Reilly

The Oklahoma teacher walkout ended Thursday on its ninth day. Teachers applauded the passage of millions of dollars in new education funding, but they are also returning to their classrooms without the full raises or classroom funding they demanded.

Alicia Priest, president of the Oklahoma Education Association, described the walkout as a victory at a press conference on Thursday and said teachers had accomplished all they could from the walkout.

“Despite tens of thousands of people filling the Capitol and spilling out over the grounds for nine days, we have seen no significant legislative movement since last Friday,” Priest said in a statement Thursday. “We recognize that our formal efforts to lobby elected leaders have achieved all that we will be able to accomplish this legislative session.”

After years of stagnant wages, teachers had called for a pay increase of $10,000 over three years and a raise of $5,000 for support professionals. Before the strike, state lawmakers passed a pay raise of $6,100 on average for teachers and $1,250 for school professionals, funded by the first major tax hike in the state in nearly 30 years.

Teachers — who took to social media to share photos of outdated textbooks and broken classroom furniture — had also called for a $200 million increase in education funding, but the state passed an increase of just $50 million.

The Oklahoma walkout became part of a wave of teacher activism in red states that began with nine-day statewide strike in West Virginia in February and has led to walkouts and protests in Kentucky and Arizona, as well.

“As classes resume, we must turn our attention towards the election season,” Priest said in a statement. “We have the opportunity to make our voices heard at the ballot box. The state didn’t find itself in this school funding crisis overnight. We got here by electing the wrong people to office.”

Bolstered by the support they received from parents and community members during the past two weeks, teachers say they have mixed emotions about seeing the walkout come to an end, and they’re not done fighting for education funding in other ways.

“Just because the Capitol is not filled with 30,000 teachers does not mean this fight is over,” said Cindy Gaete, who she cried when she saw thousands of protesters at the state capitol in Oklahoma City on Tuesday after she marched more than 100 miles from Tulsa in protest.

Gaete, a second-grade teacher at Marshall Elementary School in Tulsa, said she still worries that students in her state are falling behind their peers around the country, after a decade of steep cuts to Oklahoma’s education budget.

“What we’re asking for is revenue streams that will be sustainable from this point forward, so that this walkout doesn’t have to happen again in the coming years,” she said. “I see the energy that teachers have and the desire to refocus that energy, so the focus will absolutely be on elections and getting true pro-education advocates into our government body.”

When she’s back in class with her students next week, she plans to talk to them about what she saw at the state capitol: “This is the best social studies class I could ever have.” 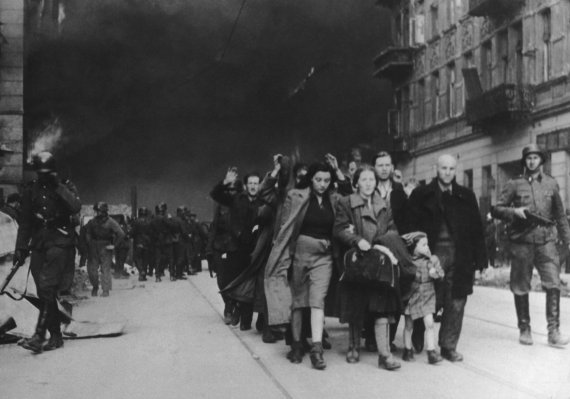 Most Americans Believe the Holocaust Could Happen Again
Next Up: Editor's Pick