The U.S. Government Used Disney Cartoons to Convince Americans That Paying Taxes Is a Privilege

Before tax preparation software guided Americans through the process of filing tax returns before the Tax Day deadline — which falls on April 17 in 2018, though Tax Day is usually but not always April 15 — there were quacks like Donald Duck.

During World War II, the federal government needed an easily recognizable face to explain a process that was unrecognizable to many Americans at the time. As TIME previously reported, while the modern income tax was introduced in 1913, only the richest Americans paid it in the early years. That changed with the attack on Pearl Harbor, which prompted Congress to pass a new Revenue Act in 1942 to fund the U.S. war effort. The number of tax returns filed skyrocketed from 7.7 million in 1939 to 36.7 million in 1942, and about 50 million in 1945, according to the Tax Foundation, a tax-policy think tank.

So Treasury Secretary Henry Morgenthau tapped Walt Disney — who was already heavily involved in making films to boost the war effort — to crash-produce The New Spirit, a motivational film explaining income taxes to Americans in 1942.

In the clip, a voice coming from Donald Duck’s radio calls for “taxes to beat the Axis!” and reminds the cartoon icon that paying taxes should be seen as a privilege. Then, armed with a fountain pen, ink well and stamp, Donald Duck lists three dependents — his adopted nephews Huey, Dewey and Louie — and pays a $13 tax on his income of $2,501 made from his Hollywood acting.

TIME didn’t think the film’s explanation of how exactly to do taxes was “crystal clear,” but acknowledged that production was a rush job, completed in the record-short time frame of four weeks, rather than the usual six to eight months for such a project. However, “it gets its propaganda across with the anesthetic blessing of laughter and great good humor. As cinema, The New Spirit is a most effective job.” It also called “Yankee Doodle Spirit,” the brand-new score by Oliver Wallace (one of the composers of the 1941 Disney classic Dumbo) “a humdinger.”

And it was a “phenomenal success,” the magazine conceded later. In fact, the results of the tax effort helped encourage Disney to become more broadly involved in educational videos, TIME explained:

So it should be no surprise that a second video was created for 1943, showing Donald Duck’s taxes funding the manufacturing of “all kinds of guns,” dive bombers, battle ships and other weapons to “blast the aggressor from the sea.” Meanwhile a narrator booms, “Just remember, every dollar you don’t spend for something you don’t need is a dollar spent to help the Axis! That’s right. And every dollar you sock away for taxes is another dollar to sock the Axis.”

Today, though those PSAs may be defunct and tax day has since moved, the influence of that moment in tax history continues. 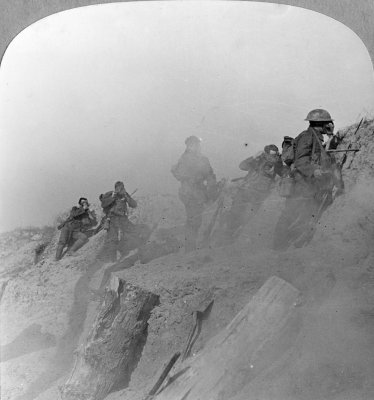 The Long, Brutal History of Chemical Weapons
Next Up: Editor's Pick