It’s unlikely that Miley Cyrus’ erstwhile best friend Lesley was in the crowd on Saturday night, as Cyrus played a sold-out crowd at the Barclays Center in Brooklyn, but lots of the singer’s other friends were there — thousands of them, wearing crop-tops and taking selfies and screaming along to the music. “I could not be more thankful for better friends,” she said at one point to the crowd. “I don’t think I realized how much you love me until just now.”

Cyrus was mourning the recent death of her dog, Floyd; she cried through more than one song. While it was surreal to watch the singer, clad in black-and-white furry chaps, sob while clutching a 60-foot inflatable replicable of Floyd (with blue eyes that glowed eerily in the light) during a performance her 2010 single “Can’t Be Tamed,” there was also some great pathos in that spectacle, in the rawness of her grief. It felt like a tidy encapsulation of Miley Cyrus circa 2014: for all the sexual aggression and wild provocation, there’s something very sincere and terribly human about her.

That tension was on full display during Saturday’s show, which paired cheap thrills (during “Party In the U.S.A.”, she simulated fellatio on a man dressed as Abraham Lincoln) with impressive musicality. Well-chosen covers of Bob Dylan’s “Lonesome When You Go,” Dolly Parton’s “Jolene,” Coldplay’s “The Scientist” and Lana Del Rey’s “Summertime Sadness” shone more than most of her own material. Cyrus’ rich, dusky vocals are better suited to ballads like “The Climb” (which she did not perform) than to zany urban pop like “SMS (Bangerz),” but — just as all the exposed flesh serves to draw attention away from Cyrus’ vision as an artist — it can be hard to hear her over the gimmicky songs. On her purest love song from Bangerz, the lush “Adore You,” she turned the camera on the audience as couples in the crowd made out. It was a cheaper trick than the song deserved.

She’s still one of the most dynamic performers of her generation; the sets, costumes and visuals were often spectacular, surrealist and visually arresting. Even if the show also felt cluttered with too many distractions, it’s weird fun, and though looking past the parade of goofy vulgarity is taxing, Cyrus makes it worth the effort. Madonna was in the crowd, too, looking on with something resembling approval. 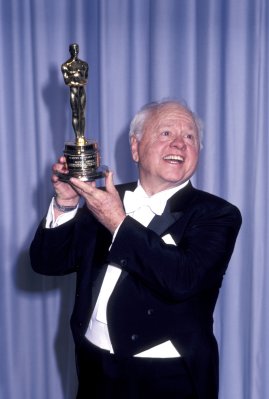 The Long and the Short of Mickey Rooney
Next Up: Editor's Pick