An aide to Facebook CEO Mark Zuckerberg closes a binder of notes left on the table as Zuckerberg takes a short break from testifying before a joint hearing of the Commerce and Judiciary Committees on Capitol Hill in Washington, about the use of Facebook data to target American voters in the 2016 election Facebook Privacy Scandal Congress.
Andrew Harnik—AP/REX/Shutterstock
By Alix Langone

Two pages of Mark Zuckerberg’s notes from his Senate hearing on Tuesday were photographed by an Associated Press photographer and quickly went viral online.

Zuckerberg, the CEO and co-founder of Facebook, was testifying in front of a joint committee about the misuse of Facebook users’ data by political analysis firm Cambridge Analytica, which Facebook failed to prevent from improperly gaining access to people’s personal information.

The opportunity to take the photograph of the open binder arose when Zuckerberg went on a break during the hearing.

“During the five-hour hearing there were three short breaks from testimony where Mr. Zuckerberg would leave the room along with his aides,” explained Associated Press photographer Andrew Harnik, who made the image. “They remained on the table for a number of minutes. After a while an aide came up to the table and closed the binder and took it away. As she did, I made a fairly wide photograph of the table with her hand closing the binder.”

Harnik said that he took the photo to help AP reporters, and didn’t realize he had captured valuable information until later. A summary of Zuckerberg’s binder of notes from the New York Times describes his talking points as including everything from prepared responses to questions about whether he would resign to whether Facebook should be broken up as a monopoly power.

The irony of a photographer snapping a photo of the Facebook CEO’s personal notes during a hearing about data privacy was not lost to the Twitter-verse, which had much to say about the picture.

Correction: The original version of this story misstated the name of the Associated Press photojournalist who took the photo. He is Andrew Harnik, not Andrew Harkin. 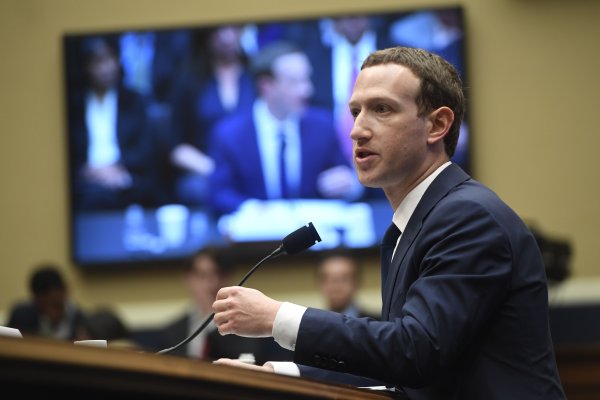 Mark Zuckerberg Was Just Asked About Diamond And Silk. Here's What to Know About the Trump-Supporting Sisters
Next Up: Editor's Pick