As President Donald Trump weighs a military response to the alleged chemical weapons attack in western Syria, several nations have signaled a willingness to join retaliatory strikes. The result is expected to be a more aggressive response than last year when the U.S. Navy unilaterally launched a salvo of 59 cruise missile attack against a remote Syrian airbase.

The U.S., France, Britain and Middle Eastern allies, including Saudi Arabia, have publicly acknowledged internal deliberations on how to address the suspected poison gas Saturday in the rebel-held western Syrian city of Douma. Activists and monitoring groups said the death toll numbered at least 60 people and injured more than 1,000 others.

Over the past two days, Trump has met with senior national security staff and military leaders at the White House and spoken to French President Emmanuel Macron and British Prime Minister Theresa May. All agreed the use of chemical weapons in Syria’s blood-soaked civil war, now in its eighth year, must come to an end.

In an indication the Trump Administration preparing to deal with any fallout related to aggressive military action in Syria, the White House on Tuesday canceled Trump’s long-scheduled trip to South America this weekend. Shortly thereafter, Defense Secretary James Mattis also canceled his weekend trip to the West Coast.

U.S. officials, who spoke on condition of anonymity, would not disclose specific plans for a military response, but acknowledged that several options were being developed and would likely include foreign allies.

The American guided-missile destroyer USS Donald Cook, which carries 60 Tomahawk cruise missiles, recently arrived in the eastern Mediterranean Sea. The ship can fire the missile from hundreds of miles offshore, well out of range of Syrian air defenses. Britain and France have warplanes in the region and may direct warships to join the Cook.

“We have a lot of options militarily,” Trump told reporters late Monday, adding that those involved would “pay a price,” including Syrian allies Russia and Iran.

U.S. intelligence agencies continue to collect evidence on the Douma attack and whether it involved the use of a powerful nerve gas – a blatant violation of Trump’s “red-line.” Videos and images of the incident posted to social media show lifeless children with foam bubbling from their mouths and other victims with unblinking eyes that have pinpoint pupils – telltale signs of chemical attack.

The Syrian government, along with ally Russia, has denied launching a chemical attack on civilians and invited international watchdogs to Douma to investigate. The offer was accepted Tuesday by the Organization for the Prohibition of Chemical Weapons.

The possible use of such weapons is a staggering episode that has drawn the world’s attention back on the many atrocities carried out by forces loyal to Syrian President Bashar Assad. The attack came just days after Trump publicly announced his desire to pull American troops out of Syria.

Now U.S. war planners are drawing up target lists that risk drawing American forces deeper into the war, in a abrupt reversal of policy. Any attack would mark just the second time that the U.S. would deliberately targeted Assad’s military. The U.S. has since 2014 focused on targeting ISIS militants in the multi-sided civil war there.

The U.S. acted alone in April last year when it attacked aircraft and facilities at Shayrat airbase, which was the launching point for a lethal gas attack in the town of Khan Sheikoun. The U.S. and its allies could follow with a similar response to the alleged chemical attack on Douma by hitting Al Dumayr air base, where the attack began. The airfield, about 25 miles from the Syrian capital of Damascus, has hosted Syrian attack helicopters as well as Russian advisors.

But if last year’s strike wasn’t enough to deter Assad, then a repeat performance — even with the inclusion of more allies — is unlikely to send the message, said Frederic Hof, a former White House advisor for Syria under President Obama who also worked on regional issues for the Reagan and George H. W. Bush administrations.

“If Assad comes to the conclusion that is a one-off strike, the Trump Administration will have accomplished nothing,” Hof said. “The message to Assad, and the world, frankly, needs to be clear: There is a high price to pay if you develop and use these weapons against civilians.”

Any operation is likely to be challenging and fraught with risk, Hof said, because Assad’s forces are so tightly entwined with Iranian and Russian troops at various bases. The target list could include what’s left of Syria’s dwindling number of attack jets, Russian warplanes at Hmeimim air base in northwestern Syria, or headquarters where Assad’s military officers command and control forces.

The elimination of any of those targets won’t break Assad’s hold on power, since he has nearly defeated the Islamist-dominated rebel groups spawned in the chaos of Syria’s 2011 revolution. But it applies pressure to halt continued use of chemical arsenal, which Assad was supposed to hand over after August 2013 his forces lobbing sarin-filled shells at rebel-held enclaves near Damascus. More than 1,000 people were killed, according to U.S. estimates.

The attack almost caused the Obama Administration to launch airstrikes. Obama relented, instead opting for a deal pushed through by Russia saw the government surrender its stockpiles of chemical weapons — including sarin and VX — to the United Nations. The Organization for the Prohibition of Chemical Weapons said more than 95% of the government’s arsenal was eliminated as a result of the agreement. But Assad launched the Khan Sheikoun attack with sarin last year and dozens of chlorine gas attacks since then.

“The last attack intended on degrading Assad’s ability to launch chemical weapons attacks and deter the regime from using the weapons,” said Jennifer Cafarella, a Syria analyst at the nonpartisan Institute for the Study of War in Washington. “The Administration accomplished the first part of the mission, but obviously didn’t convince Assad not to use chemical weapons. We should expect a more convincing response this time.” 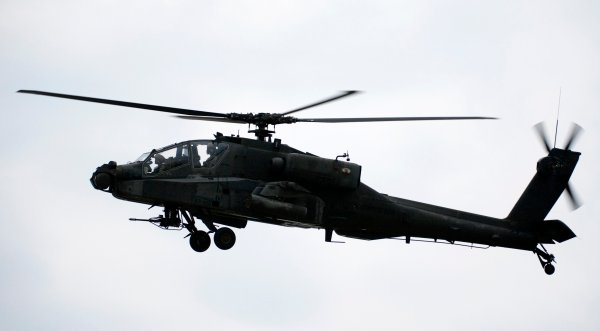 2 Soldiers Killed in Helicopter Crash at Fort Campbell
Next Up: Editor's Pick