It’s been a rollercoaster of a past year for 2005 American Idol winner Carrie Underwood: In November, the 34-year-old took a tumble that required 40 to 50 stitches for a face injury and broke her wrist. On Tuesday, she shared an update on her website, announcing that she’s “healing pretty nicely” — and that she has a new single and album on the way.

“My wrist is almost back to normal, about 90% there,” she wrote in her letter to fans. “And my face has been healing pretty nicely as well. I definitely feel more like myself than I have in a while.” She added that her period of “forced relaxation” has had the silver lining of giving her time to spend with her son Isaiah and her hockey player husband, Mike Fisher, who recently came out of retirement to play for the Nashville Predators.

But the real news is that she has new music on the way. The first single, “Cry Pretty,” will be out April 11, and was co-written with Hillary Lindsey, Liz Rose, and Lori McKenna — and she’ll be performing it live during the Academy of Country Music Awards, which will be held on April 15 in Las Vegas. As for the album? Although there were no timeline details, she did say that she has co-produced it, a first for her, with collaborator David Garcia.

Underwood’s last album was 2015’s platinum Storyteller, which featured country chart hits “Dirty Laundry” and “Church Bells.” Her latest song, “The Champion,” has become a sporting event anthem since she released it with Ludacris earlier in 2018. 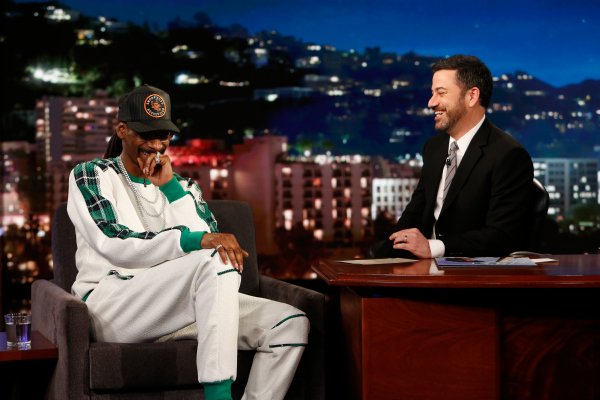 Jimmy Kimmel Plays 'Who’s High?' in Honor of Snoop Dogg’s Visit on the Show
Next Up: Editor's Pick