Leonardo DiCaprio is a lucky man: He got to spend time learning from Dr. Jane Goodall over the weekend at the famous primatologist‘s fundraising event in Beverly Hills on Saturday. Musician and animal rights activist Moby came along for the event too. (Also there: Sex and the City actress Kristin Davis and designer Nicole Richie.)

This isn’t DiCaprio’s first encounter with the rockstar scientist; both are U.N. Messengers of Peace. The Revenant Oscar-winner was appointed to focus on climate change and Goodall is focusing on continuing her legacy of conservation.

After the “Up Close with Dr. Jane Goodall and Friends” event at the Beverly Hilton Hotel, DiCaprio took to Instagram to share a photo of himself along with Goodall and Moby, calling it an “inspiring day in L.A.” (Moby also shared the image, calling out Goodall and DiCaprio as two of his “favorite environmentalists.”)

Goodall has famously dedicated her life to chimpanzee research, founding the Jane Goodall Institute and Roots and Shoots program to support continued research in conservation and animal behavior. DiCaprio, meanwhile, fronted the Before the Flood climate change documentary and is a vocal advocate on matters of climate change, having set up a foundation back in 1998 to support environmental causes globally. He’s also been a primate proponent, producing the 2014 documentary Virunga about the endangered mountain gorillas of the Democratic Republic of Congo, which came out on Netflix. 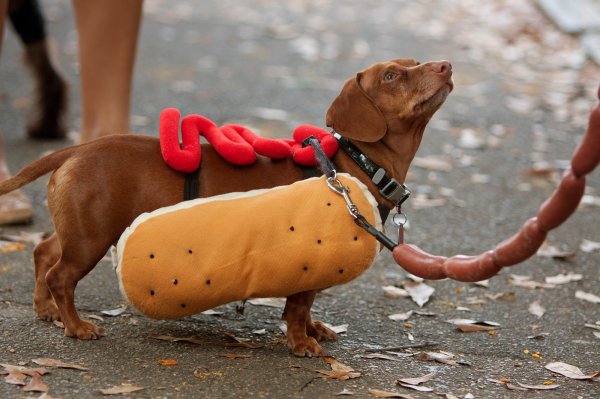 Over 1,000 Dachshunds Met Up For an Epic Wiener Dog Walk
Next Up: Editor's Pick