I Was a Liberal Who Worked at Fox News. Here's What That Taught Me About Arguing Politics

ATU Images—Getty Images
Ideas
By Sally Kohn
Sally Kohn is a CNN political commentator, activist, host of the podcast State of Resistance and author of The Opposite of Hate: A Field Guide to Repairing Our Humanity.

It may seem surprising for a liberal commentator like myself, but from 2010 to 2013, I worked in the most prominent den of American conservatism: Fox News. During my time at the network I came to realize how condescending I’d been in my views about not only the people who worked at Fox News but the people watching at home. And condescension is just a snooty form of prejudice; we are only condescending to those we feel are inherently beneath us. The more I got out of my own liberal bubble, the more I met other conservatives who were neither stupid nor hateful — or at least no more deliberately hateful than I was. Those experiences really challenged my biases and assumptions. I’m not saying that Sean Hannity is the nicest person on the planet; his political views are certainly not anywhere near what I would reasonably call nice. What I am saying is that I realized that the person I’d thought of as entirely cruel, as the caricature of a horrific right-wing monster, is actually caring and kind, and a good dad and a supportive friend. Including a supportive friend to me.

Aunt Lucy has a deep love for her friends and family, a great sense of humor, and a laugh that feels like a tickle. Aunt Lucy (not her real name, by the way) lives in the middle of the country and is a conservative Republican. She also loves me and my partner and our daughter and welcomes us with open arms at every family occasion we manage to attend. The few times we’ve cautiously talked politics, Aunt Lucy has been curious and kind. Aunt Lucy watches Fox News, and eventually it dawned on me that most Fox viewers are probably just like her — decent, curious about the news, intending to learn and do something good with the information. I started to picture my aunt Lucy when I would go on Fox, and then when I would go on CNN, and even when I would respond to people on Twitter. It made it easier for me to think and talk and act from a place of kindness, not hate — to not stereotype the invisible people on the other side of those screens but instead to imagine my aunt Lucy, someone I love and respect.

For me, it’s infinitely more encouraging, not to mention more effective, to treat conservatives as a bunch of Aunt Lucys instead of a cache of trolls or a “basket of deplorables.” Nobody is going to engage in a constructive dialogue with me if they think I believe they’re a bridge-dwelling gnome or a totable pile of rot.

People often ask me how they can talk to their conservative relatives at family gatherings like Thanksgiving. I actually have a handy tool, taught to me by Matt Kohut and John Neffinger, authors of the book Compelling People, as well as their colleague Seth Pendleton, with whom I’ve worked leading media trainings and public-speaking workshops.

Imagine my aunt Lucy says something about how she doesn’t mean to be anti-immigrant or anything, but the economy is just really bad right now and we don’t have enough jobs for the people who are already here. Now, my natural instinct is to argue: “No, you’re wrong, and let me explain the three reasons why!” But what we know from neuroscience is that while we all need to use our frontal lobes to engage in a reasoned discussion — and to be open to persuasion — when we perceive an argument coming, our frontal lobes shut down and the fight-or-flight part of our brain turns on (the part of the brain, as we’ll see later, that also holds our biases and stereotypes). If we want to keep the possibility of persuasion open, we have to stay conversational. Also, in her statement, my aunt Lucy isn’t expressing cold hard facts so much as she’s expressing a feeling about the facts as she understands them. And as every good couples counselor I’ve ever been to has told me, you can’t argue with feelings. If my partner says I hurt her feelings, I can’t say, “No, I didn’t!” They’re her feelings — and they’re inherently valid by virtue of her feeling them.

So instead of arguing, here’s a tip, which uses the shorthand ABC. The A stands for “affirm.” First, you find a feeling that you can genuinely affirm. In this hypothetical conversation with my aunt Lucy, I might say, “I’m also really worried about the economy right now.” Or, “I completely agree it’s important that everyone has access to a good job.” It’s important that I’m not making it up. It’s not some act or gesture. I mean it. I can really, authentically agree with that part of what Aunt Lucy is saying. So I start with that.

Next is B, for “bridge.” It does not stand for “but.” It also doesn’t stand for “however,” which is the Harvard of “buts.” It’s a bridge, a way of saying “and.” You can actually just say “and” — or “that’s why” or “actually” or “the thing is” or even “the good news is.” Anything but “but.” “But” basically invalidates whatever came before it. Like when I say to my partner, “I’m sorry, but . . .” According to those same couples counselors, that means I’m not at all sorry. Apparently, that’s what my partner thinks it means, too.

Then comes C — “convince.” This is where I put whatever I was inclined to spit out in the first place, about how comprehensive immigration reform actually raises wages and working standards for immigrant and citizen workers, or whatever point I wanted to make.

In my experience, ABCing is hard to do in the moment but incredibly effective when done right. It’s a powerful tool for what I call “connection-speech,” which not only lets you make your point but helps you make it in a friendly, respectful way that can be heard.

But beyond the ABC tool, when people ask how to talk to their own Aunt Lucys about politics, I often ask how they talk with their family members about topics other than politics. Do they yell and scream at their aunt if she loves some movie they think is stupid? Of course not. Maybe they get heated and say things like, “Seriously? You don’t think Dirty Dancing is the greatest love story of all time?” But the conversation stays civil, and any outrage is secondary to the overwhelming spirit of love. I’m not going to disown Aunt Lucy for not liking Dirty Dancing.

Obviously, political issues are far more important. But still, I love Aunt Lucy infinitely more than I dislike Donald Trump. Remembering that helps. And frankly, I have plenty of good friends I don’t see 100 percent eye to eye with but generally think are “on my side.” What if I only agree with them on 90 percent of issues? Or 60 percent? Or 40 percent? Where do I draw the line between accepting we just “agree to disagree” and defining them as monstrous enemies? The thing is, I give “my people” on “my side” the benefit of the doubt. Why don’t I do that for Aunt Lucy?

Connection-speech offers a ray of hope in the dark storm cloud that is internet vitriol, and vitriol in general. Because the fact is, we all say we don’t like this crap. For instance, most Americans say they don’t like mudslinging political ads and negative campaigns. And yet we keep voting for the mudslingers. Do we really want what we say we want? If so, we have to start actually supporting it and modeling civility ourselves. Both offline and on, if we stop fanning hate and instead practice connection-speech, that little ray of hope for a better way of interacting and even disagreeing with one another could spread.

Excerpted from The Opposite of Hate: A Field Guide to Repairing Our Humanity by Sally Kohn © 2018 by Sally Kohn. Reprinted by permission of Algonquin Books of Chapel Hill. All rights reserved. 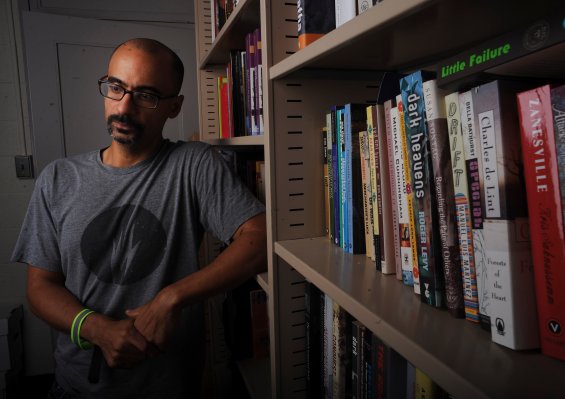 'I Never Told Anyone.' Author Junot Díaz Shares His Emotional Story of Childhood Sexual Abuse
Next Up: Editor's Pick