Alec Baldwin appeared as Donald Trump on Saturday Night Live again this weekend, holding a press conference with the leaders of Baltic states, who he largely ignored to go off script.

“Thank God that’s over,” Baldwin as Trump complains in the sketch.

“Time to freestyle. A big congratulations to Vladimir Putin,” he exclaims, after reading a note from his staff that says “Do not congratulate Putin.”

“He won a great, great very transparent victory in the Russian election,” Baldwin’s Trump continues. “Fantastic job, Putin. Even though no one has ever been tougher on Russia than I am. Including Hitler. Okay, that’s it from me.”

The opening sketch touched on many of the latest news stories of the week, from Trump’s hatred of Amazon CEO and founder Jeff Bezos and escalating trade wars with China.

Baldwin’s Trump also addresses the revival of the hit TV show Roseanne. The audience is treated to Trump’s inner monologue while he zones out of his own press conference, saying that he’s bored and wishes he was watching Roseanne.

“How great is that show? Roseanne loves me. She is like a good Rosie O’Donnell,” he says to himself.

Overall, this weekend’s show didn’t shy away from pointed and politically charged jokes, using Baldwin’s character to offer some pretty strong commentary on the Tump presidency so far, which has consistently been staple material for the iconic variety show’s 43rd season.

“Here’s the thing no one else is saying, and I’m the only one who’s willing to actually say this: I don’t care about America,” Baldwin as Trump declares at one point during the news conference. “This whole presidency is a four-year cash grab, and admitting that will probably get me four more years.”

Black Panther star Chadwick Boseman hosted the show. Rapper Cardi B, who also confirmed rumors that she is pregnant with her first child with fiancé OffSet, was the musical guest. 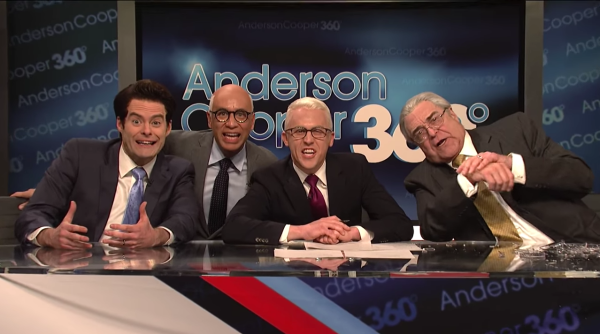