A capricious dwarf mongoose has gone viral for playing dead around an unsuspecting yellow-billed hornbill bird in a clip filmed in the Sabi Sands Game Reserve in South Africa.

In the Safari Live video, the mongoose approaches the hornbill only to turn around and faint, appearing to fake its death while lying on its back. This goes on hilariously multiple times, although the hornbill seems nonplussed by the mongoose’s efforts.

While many animals play dead as a strategy for capturing their prey, National Geographic reports that this is more of a friendly overture on the part of the mongoose and that many dwarf mongooses roll on their backs while they play with other mongooses, although it’s far less common for them to interact with birds like that.

Watch the full clip of the mongoose and the hornbill below. 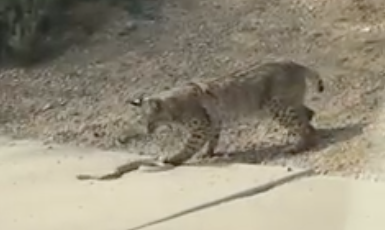 This Bobcat's Suspenseful Fight With a Rattlesnake Has Gone Viral
Next Up: Editor's Pick