Houthi fighters inspect the site of a reported airstrike by the Saudi-led coalition that targeted Yemen’s presidential palace in Sana‘a on Dec. 5
Mohammed Huwais—AFP/Getty Images
By W.J. Hennigan

While Saudi Crown Prince Mohammed bin Salman swept through American cities the past two weeks promoting himself as a reformer, his country contributed to one of the largest donations for humanitarian aid in history. Saudi Arabia and United Arab Emirates pledged $930 million to Yemen, a war-torn nation where more than 10,000 people have died thus far, and the lives of millions more remain at risk from famine.

It was an ironic gift, considering bin Salman, who currently serves as his nation’s defense minister, is also the architect of the war.

Bin Salman launched the military campaign in March 2015 – with little warning to Washington – after armed Houthi rebels quickly swept across Yemen and forced the Saudi-backed president into exile. The rebel group had to be confronted, bin Salman determined, because they were proxy forces of archrival Iran, a Shiite Muslim nation. He enlisted the help of Egypt, United Arab Emirates, and other majority Sunni Muslim nations.

What has befallen Yemen since is “the worst man-made humanitarian crisis of our time,” according to the UN.

Saudi Arabia and United Arab Emirates donation was the largest of the more than $2 billion in funds that were pledged Wednesday by international donors during the UN event in Geneva, Switzerland. The UN said 22 million people, or three-quarters of the population, require some form of humanitarian assistance.

If bin Salman has concerns about how his war effort has damaged his standing on the world stage or deepened the humanitarian tragedy that’s playing out, he didn’t relay those concerns to TIME. Problems in Yemen, he said, stem from the Houthis. “Let me tell you one important thing: The humanitarian problem in Yemen didn’t start in 2015. It started in 2014 when the Houthis start to move,” he said.

Bin Salman told TIME that Saudi Arabia is “doing our best to be sure that the interests of the people in Yemen — health care, education, whatever — it’s supported.” He added that “any initiative made from the UN or any other groups around the world, immediately we help and we try to do our best to push positively in that side.”

Kristine Beckerle, a researcher with Human Rights Watch who recently returned from a fact-finding trip to Yemen, said bin Salman’s statements has no basis in fact. The Saudi-led coalition has “exacerbated” the humanitarian disaster in Yemen by initiating blockades that halt the spread of food, medical supplies, and care. Late last year, Saudi Arabia closed the Yemeni borders in retaliation for an intercepted Iranian-made ballistic missile near the capital, Riyadh, allegedly fired by Houthi rebels. The Saudis sealed all entry via land, air, and sea to stem suspected arms smuggling.

“The response was to cut entry and exit points to aid and access to the country’s most important ports for weeks upon weeks, in addition to the restrictions already in place,” Beckerle said. “They should have known full well what kind of impact that would have had on the 26 million Yemenis living in the country.”

Photograph by Martin Schoeller for TIME

Yemen gets about 90% of its food supplies imported through key ports such as Hodeidah. If such imports are restricted, aid agencies predict mass famine. For now, the blockade has been lifted, but the Saudi- led coalition continues to close airports and block access to vast swathes of the country from journalists and human rights groups.

Indeed, UN Secretary-General António Guterres said that while the large monetary donations “are very important… they are not enough. We need unrestricted access everywhere inside Yemen and we need all the parties to the conflict to respect international humanitarian law, and to protect civilians.”

Guterres “expressed his deep gratitude” to bin Salman in-person when he came through New York but urged him to end the conflict.

Hunger, death, and disease are rampant across Yemen, which was already the Arab world’s poorest nation before the conflict plunged it into further despair. Two million people have been displaced and more than 8 million people are near starvation, according to the UN. The organization has said a child under the age of 5 dies every ten minutes of preventable causes.

Radhya Al Mutawakel with the Yemeni non-profit Mwatana Organization for Human Rights said the situation in country is increasingly dire and if Saudi Arabia wanted to help it would end the conflict. “Every Yemeni is touched by this war, no one escapes it,” she said in a phone interview from the capital city of Sana’a. “You are waiting to die if you are here. And if you live, you are safe by accident.”

The Saudi-led air campaign has bombarded hospitals, homes, schools, and open-air markets, according to reports compiled by Mwatana and other non-profit investigators. In one of the worst incidents, Saudi fighter jets repeatedly launched airstrikes on a funeral in Sana’a in 2015 with U.S.-made munitions, killing more than 140 mourners, including children, local officials and pro-peace Yemenis, while several hundred others were injured.

The airstrikes have also demolished public facilities and health care centers, which has forced people to drive hundreds of miles to receive medical attention. More than 20 million people, including 11 million children, are in urgent need of humanitarian supplies, the UN said, exacerbated by the worst cholera epidemic in history.

Civilian casualties are an unfortunate reality of war, bin Salman said. “In any military operation, mistakes happen,” he said. “The question is: Are these mistakes intentional?”

Yemen Data Project, an independent monitoring group, has been collecting data on the location and targets of the aerial war. The organization says the Saudi-led coalition carried out a total of 16,749 air raids were recorded from March 26, 2015 to March 25, 2018, or an average of 15 bombing runs per day. Nearly a third of those airstrikes, or 31%, targeted non-military sites, the data said.

Whether these airstrikes are intentional or not, it’s clear that the U.S. government’s patience with such attacks is running thin. Defense Secretary James Mattis expressed the Trump Administration’s frustrations with the mounting death tolls when bin Salman visited the Pentagon on March 22. “We are going to end this war, that is the bottom line,” Mattis said. “And we are going to end it on positive terms for the people of Yemen but also security for the nations in the peninsula.”

Read More: The Saudi Crown Prince Thinks He Can Transform the Middle East. Should We Believe Him?

Meanwhile, the U.S. government has provided intelligence, munitions and midair refueling to Saudi warplanes since operations against the Houthis first began. The U.S. government has worked over that time to help Saudi commanders improve targeting processes in order to mitigate against civilians being killed. The lack of results triggered the Senate to vote on ending U.S. military support for the war, but that effort narrowly failed.

In hopes of bringing the war to an end, bin Salman said the Saudi-led coalition is now working to drive a wedge between different factions of the Houthis. He doesn’t need more help from the U.S. in accomplishing his goals. “We don’t get a lot of support from the United States of America and we don’t ask for a lot of support from United States of America,” bin Salman said. “We are doing this ourselves by coalition from the Middle East and we believe we are doing it in the interests of the whole world.”

The humanitarian problems in Yemen would’ve been worse if the Saudi-led coalition didn’t act, bin Salman said. “Sometimes the Middle East, not all the choices it will be between a good and bad choice,” he said. “Sometimes we are between a bad and worse choice.” 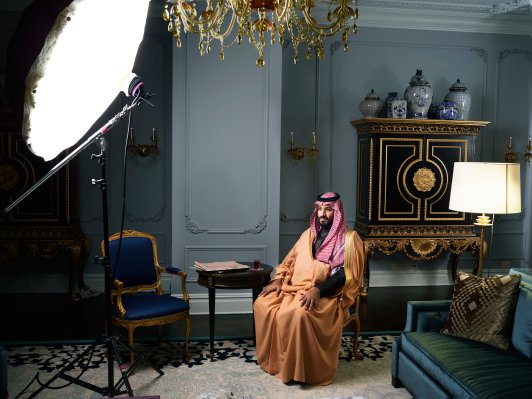 Our Q&A With Saudi Crown Prince Mohammed bin Salman
Next Up: Editor's Pick