Even if you don’t know much about baseball, you probably know a bald eagle swooping onto the diamond and landing on a player is not, say, common.

At the Minnesota Twins’ home opener against the Seattle Mariners, however, a confused – or rebellious – bald eagle flew onto Mariners pitcher James Paxton.

Somehow, Paxton looked unconcerned by the invasion of his field space, and nimbly shirked the bird’s advances to stand on his shoulder and back.

According to the Seattle Times, the bald eagle was meant to fly across the stadium as part of the opening ceremony, where his handler was presumably waiting. As you can see, that’s not what the bird decided to do.

One Star Tribute reporter described the spectacle on Twitter, saying the bald eagle “went haywire and landed on James Paxton’s shoulder! Handler had to rush out to retrieve it!”

Maybe the little guy was just looking for some of those Cracker Jacks everyone’s always singing about; maybe he was trying to show a Canadian how majestic America’s national bird could be. Or, maybe, he was misled by a commercial featuring James Paxton with a nest in his baseball hat.

Whatever the bird’s motive, the interaction definitely made for an eventful opening ceremony. You can see the handler rushing out to collect the rogue eagle below.

Correction: The original version of this story misstated one of the team’s names. It is the Minnesota Twins, not the Minneapolis Twins. 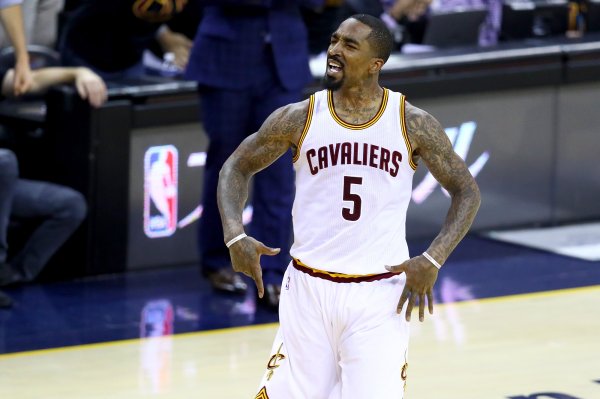 J.R. Smith Says This Dog Is Responsible For His Season's Best Game
Next Up: Editor's Pick