Tiger Woods Fell Short of a Miraculous Masters Comeback. But He Gave Himself a Chance

Tiger Woods of the United States plays a shot from a bunker on the tenth hole during a practice round prior to the start of the 2018 Masters Tournament at Augusta National Golf Club on April 3, 2018 in Augusta, Georgia.
Andrew Redington—Getty Images
By Sean Gregory

There was Tiger Woods on Thursday at the Augusta National Golf Club, staring into the distance on the 12th hole, looking mighty miffed. He closed his eyes, as if he didn’t want to see what awaited. Woods had just dropped his tee shot into Rae’s creek. After a bogey on the previous hole, in which one of his shots skimmed the gallery, Woods now found himself five strokes behind then-leader Marc Leishman. Having earned a penalty on 12, his round could only get worse. Tiger’s much-hyped comeback was in danger of imploding.

After struggling with debilitating back pain that threatened to shut down his career, Tiger Woods seemed to enter this year’s Masters — his first appearance since 2015 — a happy, rehabilitated man. His game was flourishing. He talked about how he was just happy to be playing. The new Tiger would smile and enjoy the ride.

But Woods is one of the greatest athletic competitors of his generation. If his pissed off looks and his stalking down the fairway alone after a hooked drive proved anything, it’s that he can’t quite extinguish that fire.

Which is probably for the better. Because after making his errors, Woods was able to lock in, like old Tiger, and give himself a chance. He saved a bogey with a tough putt from the edge of the green on 12th. Now three over par, and six shots off the lead, he hit more fans on the 13th hole — he parred it — but then birdied the 14th. His tee-shot struggles continued on the 15th, as he left his drive right. Woods recovered, but his 25-foot birdie attempt fell short. (Woods, who’s shot a remarkable 142-under par on par-5s in his Masters career, played them even on Thursday, a disappointing showing.)

But on 16, the site of his most dramatic Masters moment — the 2005 pitch in the final round that finally fell in after sitting on the lip — Woods rolled an uphill birdie putt home. His swing returned on the final two holes, as he crushed two straight drives into the fairway on the way to back-to-back pars.

Tiger stood on the brink of falling eight shots, or worse, off the lead. But he finished his round one-over, still well within striking distance.

Even with Tiger Woods, 42, thrilling television fans with his play before the Masters, beating 86 of the other best golfers in the world at Augusta was always a difficult proposition. Winning these tournaments is tough, especially with so many younger talented stars who’ve won majors — like Jordan Speith, Justin Thomas, and Rory McIlroy — still in their primes. Woods avoided a Day 1 disaster, unlike defending champ Sergio Garcia, who dumped five balls in the water on 15. He finished with a 13 on the hole, tied for the highest single-hole score in Masters history. The clip will be watched forever.

Meanwhile, Tiger’s score put him in a much better spot on the leaderboard. After Masters Thursday, there’s still hope for Tiger magic on Sunday afternoon. What more can a golf fan ask for? 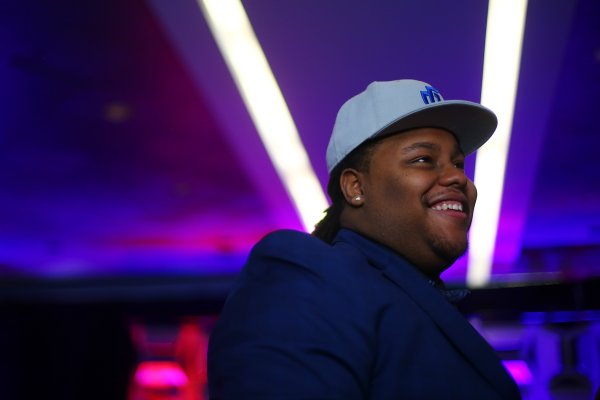 The NBA Just Took Its First Big Step on the E-Sports Stage
Next Up: Editor's Pick