Border Crossings Hit Historic Lows in Trump's First Year, But They Were Up in March

The Trump Administration plans to send National Guard troops to the U.S. border with Mexico to fight a potential surge of migrants, but its own data on border crossings tells a more complicated story.

New data released Thursday by Customs and Border Protection shows agents apprehended or rejected over 50,000 people who were attempting to illegally cross the border, a 37% increase from the month before.

But overall apprehensions remain a mere fraction of the peak in 2000, when 1.8 million people were caught illegally entering the U.S. In March of that year alone, some 220,000 people were apprehended by border agents — more than four times the number caught last month.

Experts say even the increase from last month could reflect simply seasonal variation — more people attempt to cross the border when it’s warm out — or the rate bouncing back to Obama-era levels after being depressed by President Trump’s more aggressive tone on immigration in his first year.

Randy Capps, the director of research for U.S. programs at the Migration Policy Institute, says it’s possible that people put off attempting to cross the border until they knew better how the Trump Administration’s policies would play out.

“People have re-evaluated and they’re starting to come back again,” he said. “This looks like the beginning of another pretty significant wave of people coming, but obviously with one month data point it’s too early to tell.”

Border crossings reached historic lows during the first year of Trump’s presidency, something he bragged about in a tweet Thursday morning.

But last year was a bit of an outlier. Attempted border crossings slowed to a crawl during the first few months of the Trump Administration, back when there was a lot of uncertainty about what the candidate who’d promised to crack down on illegal immigration and build a wall between the U.S. and Mexico would actually do and when.

It’s unclear yet how the Trump Administration’s plans to deploy National Guard troops to the border will affect migration. Data from Customs and Border Protection shows that a substantial portion of those attempting to come into the U.S. are unaccompanied children and family units from the Golden Triangle countries of Guatemala, El Salvador, and Honduras. Such migrants have tended to surrender themselves to border patrol agents as soon as possible in an effort to seek asylum in the U.S.

But the administration has said that it will also seek to change policies on asylum seekers and the handling of detainees that could also affect migration. 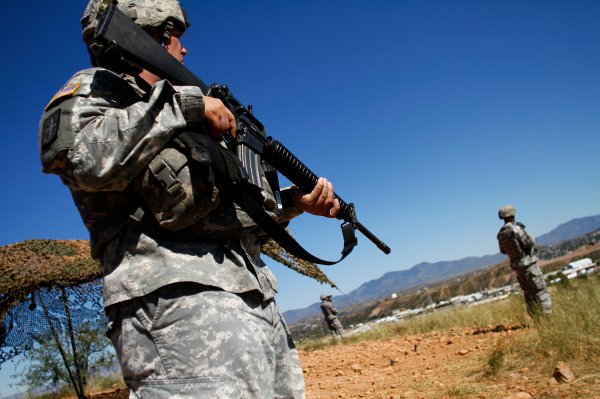 Trump Sends Troops to the Border
Next Up: Editor's Pick