Listening to Saudi Crown Prince Mohammed bin Salman talk about the future of oil feels like taking a step back in time to a period not long ago when surging oil prices seemed destined to fuel a bright future in the resource-rich kingdom.

In an interview with TIME last week, bin Salman, the 32-year-old who runs the day to day business of Saudi Arabia, insisted that his country’s oil business would remain secure as demand for the resource grows and other countries suffer from reduced supply.

“There is new growing demand,” he told TIME. “We are not only keeping the 10 million barrels [daily] we’re producing. It seems that we will produce much, much, much — a lot of barrels in the future.”

Current and former American officials caution that the Saudi reliance on oil is one of the greatest threats to a fragile stability in the Middle East as well as the crucial U.S.-Saudi relationship.

Read More: The Saudi Crown Prince Thinks He Can Transform the Middle East. Should We Believe Him?

And without a strong Saudi Arabia, the United States lacks a reliable partner in the Arab world. Decades of symbiosis have tied Washington and Riyadh, in recent decades largely based on mutual skepticism of Tehran. The shared desire to curb Iran’s ambition have forced many an American diplomat to endure a dressing-down in the name of the long-term alliance and to turn a blind eye to the Saudis’ horrifying human rights record.

One American who was in the kingdom earlier this year for high-level meetings said it was a coin-toss whether bin Salman’s pricey changes could be sustained. This American who worked as a senior official in Democratic administrations said he heard compelling arguments from his counterparts why the overhauls were proceeding without hiccup, and just as many people made an equally credible argument that the Saudis were running on borrowed time.

“A lot of people are going to be proved wrong,” he said.

Salman is right that oil isn’t going anywhere, at least in the short- to medium-term. A report from the International Energy Agency released last fall shows oil demand growing through 2040, largely from China’s rapidly expanding economy, even as countries adopt new policies to address climate change.

But the IEA also found that new oil production in the U.S. and a handful of other countries will meet most of that new demand as oil companies continue tap into shale oil inaccessible even just a few decades ago. Production in the U.S. alone will cover 80% of the world’s new oil demand in the next three years, according to an IEA report. “We are going to see a major second wave of U.S. shale production coming,” Fatih Birol, the head of the International Energy Agency, told reporters at the CERAWeek energy conference in Houston last month.

And Saudi Arabia still faces challenges to turn a profit on the oil it does produce. Globally, oil currently trades around $63, short of what International Monetary Fund analysts say is the country’s $70 per barrel break even point. That gap makes a big difference in a country expected to run a $52 billion budget deficit in 2018.

In the longer term, Saudi Arabia faces the prospect of what’s known in the industry as “energy transition.” Countries have increasingly moved away from running their economies on fossil fuels like coal and oil in favor of cleaner and increasingly cost competitive energy sources like wind and solar. That trend is expected to continue as technology advances and the pressure to address climate change increases. In the transportation sector, vehicles have become more efficient, using less fuel, and the world’s roads are expected to accommodate a rapidly increasing number of electric vehicles. BP said earlier this year that it expected oil demand to peak by 2040 as the number of electric vehicles grows 100-fold.

During Barack Obama’s term, his pursuit of energies apart from oil was a major sticking point for U.S.-Saudi relations. Obama’s green-energy push was seen in Riyadh as an affront to their economy, and counterproductive to Saudi leadership. One veteran diplomat said she was unable to finish any meeting with her Saudi counterparts without hearing how U.S. wind, solar and ethanol were tantamount to direct aid to Iran. American oil consumption, the Saudis argued, was needed to fund relatively minor reforms. “Petrol is patriotic,” one Obama-era official laughs. “High MPG standards are not.”

In his interview with TIME, Salman pointed to petrochemicals — products like plastics and other synthetic materials made from oil feedstock — as an area of opportunity in the event of a slow down in oil demand. That assessment is in line with the views of the IEA and projections from major oil companies like Exxon Mobil.

“Every one of you wearing part of these petrochemicals and materials,” said bin Salman. “For your button and your pen and your shoes and your phones you have some of these stuff, and more stuff will come.”

Saudi Aramco, the state-owned oil company, has invested heavily to that end. Last year, Saudi Arabia took ownership of the Port Arthur oil refinery, a Texas facility that ranks as the largest oil refinery in the U.S., and planned to invest up to $30 billion in its U.S. operations largely to increase its petrochemical output.

But even as the Saudis continue to express confidence that the country will ride the energy transition the attention they pay to the issue confirms its significance. “If they’re talking about it,” says Amy Jaffe, director of the program on energy security and climate change at the Council on Foreign Relations, “they’re worried about it.”

Though the challenges facing the oil industry may not be a favorite discussion topic among Saudi Arabia’s rulers the realities inform the bold reform initiatives underway, including bin Salman’s Vision 2030 plan to reform the Kingdom. Some of the reforms are social, diminishing the role of religious clerics and empowering women, for example, but many of the economic reforms are intended to shield the country from future pain in the oil sector. Most obviously, the country is planning an initial public offering for Aramco. With a valuation as high as $2 trillion, the IPO could generate $100 billion for the country to help diversify.

“We are ready,” bin Salman said of the IPO. “Now it’s a matter of choosing the right time.”

Write to Justin Worland at justin.worland@time.com and Philip Elliott at philip.elliott@time.com. 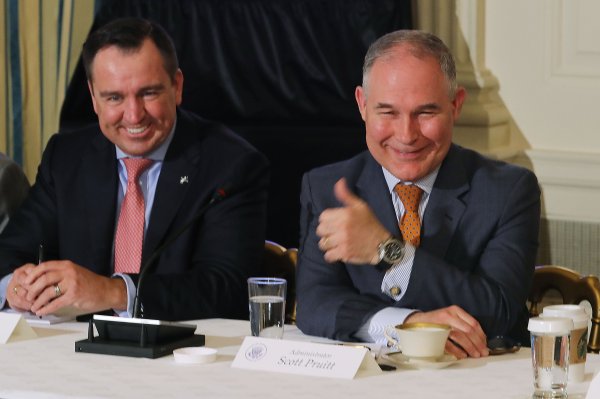 The EPA Head's Controversial Room Rental Is Not His Only Tie to Natural Gas
Next Up: Editor's Pick