Glenda Jackson The two-time Oscar winner and former British parliamentarian is back on Broadway in Edward Albee’s Three Tall Women
Chris Floyd—Eyevine/Redux
Ideas
By Belinda Luscombe
Luscombe is an editor-at-large at TIME and the author of Marriageology: The Art and Science of Staying Together.

You acted for 35 years and won two Oscars, and then you spent 23 years in the British Parliament. Now you’re acting again, at 81. Any fears?

Absolutely. I didn’t think I would have the physical or vocal strength for it. So I swam every morning at my local baths until I could swim a half hour unbroken.

It’s a small club, the people who have been successful in acting and in politics. How are the jobs similar?

All great drama is essentially trying to tell the truth about what we are. All Shakespeare ever asks is, Who are we, what are we, why are we? And I think politics at its best is trying to find out how you do create a society in which there is genuine equality which acknowledges that we are different.

You can afford to be choosy about roles. Why this play?

It’s a very tough play to do. A major plus is that you’re acting with other actresses, because–and this has never changed in my lifetime–contemporary dramatists don’t find women interesting.

How has theater changed since you left?

How do you feel about the recent outing of all the sexual harassers in show business?

In my country, two women die every week at the hands of their partners. The idea that this is suddenly going to transform the lives of women is absurd. Violence against women is as old as we are. The trafficking of women isn’t going to stop because some big guy in Hollywood has to give up his company. And to think that people didn’t know it was going on. Come on.

Ronald Reagan, Arnold Schwarzenegger, Jesse Ventura and even, in a sense, President Trump all made the transition from entertainer to politician. But not so many women. Why?

It’s much, much harder for a woman to go into politics. There are so many roadblocks. I remember speaking to a conservative MP, and she said she’d get questions like, Well, who will look after the children if you’re campaigning?

A record number of women are running for election in the U.S. this year. What’s your advice?

You have to acknowledge it’s going to be hard. You’re asking people to give you something which, in my opinion, is their most precious possession: their vote. Voters have every right to question you on the level that goes beyond the usual social exchange. You have to be ready for that.

Is there something you mourn about growing older?

It irritates me that I can’t cut my own toenails.

What do you think you’ve gained in return?

I have realized how much I don’t know. That’s a real revelation. This idea that age blesses you with some kind of knowledge is rubbish.

Your mother was a cleaner and your father a bricklayer. What did you try to give to your son from your upbringing?

He went to a local school, he never came near a theater or a film set, he was never photographed. He said to me once, “Are you famous?” I said to him, “Well, possibly.” He said, “What are you famous for?” I thought then we’d done pretty well.

Who have the bigger egos, actors or politicians?

The egos that I saw in Parliament wouldn’t have been tolerated for 30 seconds in the theater. 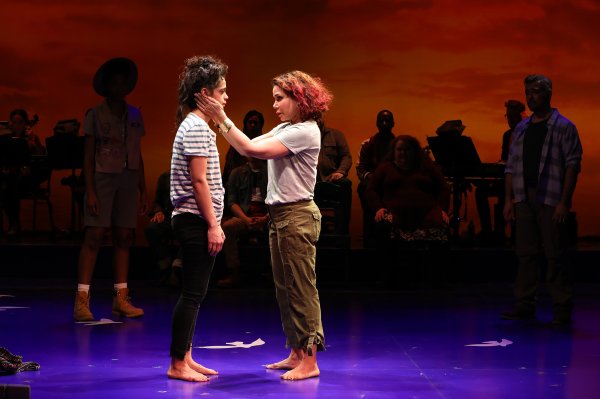 New Musical Miss You Like Hell Puts a Human Face on the Looming Specter of Deportation
Next Up: Editor's Pick