Scott Pruitt's Rollback of Emissions Standards Is a Big Deal. Here's Why the Rollout Fell Flat

The big three U.S. automakers hit the road early to ask the Trump Administration to hit the brakes on regulation. Not long after last year’s presidential Inauguration, the CEOs of GM, Ford and Fiat Chrysler traveled to Washington, D.C., and made an in-person pitch to soften vehicle-emissions rules enacted under President Obama. A few weeks later, during a visit to Detroit, President Trump promised to take care of the auto industry.

Now that Environmental Protection Agency head Scott Pruitt has delivered, however, carmakers are concerned that the rollback will bring a whole new set of challenges.

Pruitt announced on April 2 that he would undo a regulation that would have required automakers to reach an average fuel economy of 54.5 m.p.g. by 2025, thereby preventing 6 billion metric tons of global-warming-causing greenhouse-gas emissions and saving 12 billion barrels of oil. The decision represents one of the Trump Administration’s most aggressively regressive moves yet on climate change. In making the announcement, Pruitt criticized his predecessors for unrealistic goals and promised to “get this right going forward.”

But the rollout fell flat. The EPA failed to find an auto dealer to play host, so Pruitt delivered brief remarks at the agency’s headquarters, with limited press access. Trump didn’t show up. Nor did he tweet about it, as he has for past environmental rollbacks. And while auto-industry trade groups attended and praised the move, individual car companies stayed largely silent, distancing themselves from the decision.

In a blog post, Ford executive chairman Bill Ford and CEO Jim Hackett said they “support increasing clean-car standards through 2025” and added, “At Ford, we believe we must deliver on CO[subscript 2] reductions consistent with the Paris Climate Accord.”

Indeed, those standards were one of two key policies underpinning an Obama Administration promise to the world that the U.S. would address global warming, and environmental scientists expected the rule to become increasingly important for reducing the nation’s carbon footprint. Without the rules, says Ann Carlson, a professor of environmental law at the UCLA School of Law, “we’re going to see a different kind of auto market.”

But Pruitt’s rollback isn’t controversial for climate reasons alone. Though automakers had requested the revision, saying compliance with Obama’s rules would be costly, they are now worried that the Administration may go too far. Most significantly, California could set its own emissions standards in response, leading to a protracted court battle that would force carmakers to operate without clear or uniform rules. “Maintaining a single national program is critical to ensuring that cars remain affordable,” the Auto Alliance trade group said in a largely supportive statement.

This hesitant reaction to Pruitt’s rollback underscores the strange position in which the EPA administrator finds himself. He is extraordinarily effective at fulfilling Trump’s promise to nix regulations–he’s made more than 20 big deregulatory moves by his own count–and also at attracting controversy that riles opponents and has led to questions about how long he can survive in a White House prone to turnover.

The ethics scandals he faces are striking: he lived for six months in a condo co-owned by a lobbyist, paying $50 a night; he spent more than $100,000 of taxpayer money on first- and business-class travel everywhere from Italy to New York City, a move he defended as a security measure; he went around the White House to give favored aides raises upwards of 30%. And that’s just news from the past few months.

His wonkier policy moves have been equally controversial. Most recently, in March, he told the conservative Daily Caller that he would stop the agency from using any studies that aren’t based entirely on data accessible to the public. This means, for example, excluding research that relies on private health information. Pruitt says it’s about transparency, but scientists say that ignoring essential public-health research endangers lives.

“This leaves me and many of my colleagues puzzled about what to do,” says Jonathan Levy, a professor of environmental health at Boston University. “How can you genuinely affect public health and decisionmaking if the decisionmakers do not wish to use science?”

Now Pruitt has hinted that the fight over vehicle-emissions standards will remain bitter if blue states don’t fall into line. “Cooperative federalism doesn’t mean that one state can dictate standards for the rest of the country,” he said.

So far, Trump has stood by his EPA chief. Still, the relationship appeared strained as the latest round of revelations hit. The White House confirmed that the two men spoke by phone in the midst of the latest controversy but declined to give any more details. Asked about Pruitt at a public appearance on April 3, Trump had a brief response. “I hope,” the President said, “he’s going to be great.” 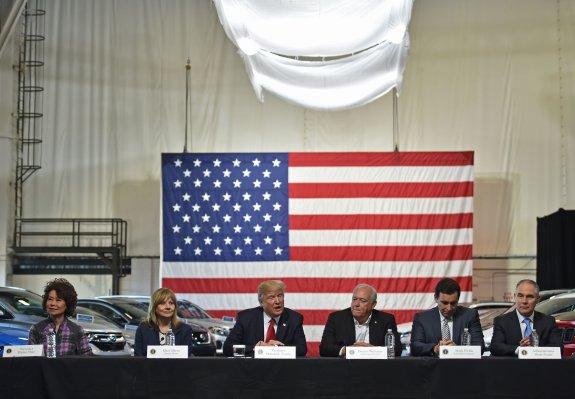