Rep. Matt Gaetz Wants to Make Trumpism the New Normal, One TV Appearance at a Time

It’s 5 p.m. on a recent Thursday and Matt Gaetz is deep in the belly of the Capitol, preparing to make his fourth appearance on cable news since dawn. That rates as a slow day for the 35-year-old freshman Representative from the Florida panhandle. This one on Fox News, which for Gaetz is tantamount to batting practice. The real game comes when the incendiary conservative appears on MSNBC or CNN and provides the sort of contrarian commentary that has made him one of President Trump’s favorite members of Congress. In a few minutes, Gaetz will go before the cameras to bemoan the “full absurdity” of special counsel Robert Mueller’s Russia investigation. But first he wants to explain his underlying philosophy.

“The convention that one should never be perceived to troll another that has a different viewpoint is a very country club approach to politics,” Gaetz explains in his office, nursing one of the 10 or so Diet Pepsis he drinks each day. “And we’re sort of in the era of Caddyshack. The caddies have taken over the country club.”

Trolling has made Gaetz a star on the right. In terms of sheer airtime, he is arguably the most visible member of the House Republican conference outside of its leadership. Unlike, say, Speaker of the House Paul Ryan, he shirks scripted talking points. A Gaetz TV hit often feels calibrated to strike the pressure points of liberal outrage, delivered with the impishness of a fraternity president before the university disciplinary committee. Remember when Trump described Haiti and some African nations as “sh-tholes”? As Republicans distanced themselves from the remarks, Gaetz went on MSNBC to validate them, describing Haiti as a land of little more than “sheet metal and garbage.”

Gaetz acknowledges that his tactics are designed to infuriate his opponents. His guest to the State of the Union in January was Charles C. Johnson, who has disputed that six million Jews died in the Holocaust and was permanently banned from Twitter in 2015 for calling on his followers to “take out” the prominent Black Lives Matter activist DeRay McKesson. Gaetz laughs about the outrage the invitation stirred up. “I’d never heard of the guy,” he says. “A colleague called me up and said what he wanted to talk about was my views on cannabis reform and bitcoin.” Gaetz says he extended the State of the Union invitation to Johnson in an off-the-cuff gesture after his original guest, his father, fell sick.

More substantively, Gaetz has been one of the House’s loudest critics of the Russia investigation, which he considers an exercise in delegitimizing Trump. “Part of Russia’s influence campaign is to engage in these asymmetric pokes at democracies everywhere, and we gotta prepare for that and deal with that,” he says. “But did the Trump campaign collude with Russia? These were folks lurching from one campaign rally to the next. I was the emcee at one of the rallies, and I only found out the people I’d be introducing at the event hours before it began.”

At this point, Gaetz’s chief of staff, Kip Talley, interrupts to show me a Twitter video his team had posted days prior, jabbing at Representative Adam Schiff, the ranking Democrat on the House Intelligence Committee, for doing a 2013 interview on the Kremlin-backed news outlet RT. “Some say that was a little trollish,” Gaetz says with a smile. “To each his own.”

Such stunts have earned him the personal attention of the President, whom Gaetz says calls every now and again to offer praise for his cable-news appearances. “He cracks me up,” Gaetz says. “When Donald Trump calls you, it’s like you have a little Trump rally in your ear.”

Gaetz would know. He became a Trump man fairly early in the GOP primary, pivoting from former governor Jeb Bush, whom he once idolized. “For everyone our age in Florida that came up in the conservative movement, Jeb Bush was like Attila the Hun,” he says. “But the ’98 vintage of Jeb turned out to be very different than the 2016 vintage Jeb.”

Gaetz’s knowledge of Florida politics is intimate. His father Don once presided over the state senate. Gaetz won a seat in the Florida house of representatives in 2010, at 28, beginning a six-year stint in Tallahassee. In the statehouse, Gaetz–who bills himself as a “pro-military, pro–border security libertarian Republican”–defied the party agenda to back legislation that would allow terminally ill patients to pursue medical-marijuana treatment. “The speaker of the house called me to yell at me for pulling an ambush,” Gaetz recalls. “But we got that bill passed in a year.”

It’s easy to write Gaetz off as nothing more than a troll, someone who provokes for provocation’s sake. But to do so is to ignore both his policy interests (he’s sponsored 15 bills this term) and the skill with which he reads the Republican electorate. His audience is the demographic of Americans whose politics are less dogma than reflex: a reaction to the perceived sanctimony of a progressive cultural climate that treats conservatism as a punch line and scolds those who fail to use the correct gender pronouns. “People in the media grew up in the Northeast and can’t comprehend the notion that there are people who like to go out to the clay pits and shoot, and afterward go eat fried chicken,” Gaetz says. “That’s the cultural bias that I think people were reacting to when they supported Trump–in particular in his assault on the media. The media became a prop in 2016.”

Gaetz declared his candidacy for Congress four days after Trump won the South Carolina primary and spent much of his campaign stumping for the candidate. “I’d knock on doors and people would discuss Trump,” he says. “They’d say, ‘You know what? He says a lot of the stuff that I’m thinking.'” This, Gaetz says, is the essential tenet of Trumpism: not economic nationalism, not xenophobia, but rather the repudiation of the poll-tested insincerity of the political class.

“Our generation, I think, has a demand for authenticity that exceeds any prior generation,” he says. “We share candid moments with one another more than any other generation through social media, but it’s also that we get the fact that the cardboard-cutout candidate with the perfect hair and the perfect life and the white picket fence–that no one really lives like that. We’re all normal, flawed people who have off-the-cuff thoughts. I think the organizing principle of American politics today is to be interesting and authentic. If you can do those two things, voters will forgive and forget, and be O.K. with a lot of other stuff.”

By embracing this philosophy, Gaetz is betting on a vision of American politics in which Trump is not an aberration but the new normal. “This is the front end of the wave,” he says. “I do not believe the Democrats are nominating Cory Booker or Kirsten Gillibrand in 2020. They’re going to get themselves a celebrity, someone like Oprah or Mark Cuban.”

It’s also fair to say that Gaetz’s trolling, and the visibility it creates, is an investment in his own career prospects. He insists that he’s not thinking beyond his re-election this fall, but it’s clear that he has big ambitions. “I’m just a guy on the Judiciary Committee with a normal set of responsibilities,” he says. “Making an argument on television, and making sure people see it on social media.” 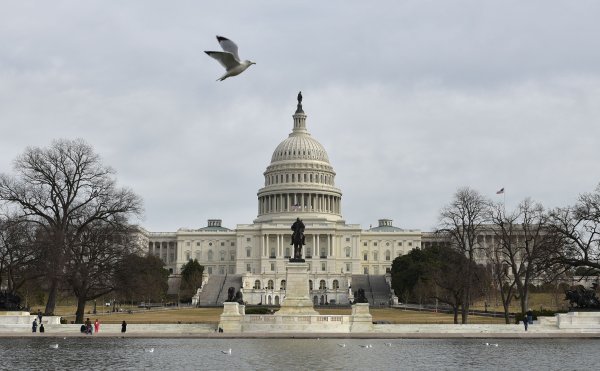 Every Woman in the Senate Is Demanding a Vote on a Sexual Harassment Bill
Next Up: Editor's Pick