President Trump Wants to Send Troops to the Border. Obama and Bush Tried That Too

The Secretary did not announce what the exact troop levels will be, but said she hopes the deployment will begin immediately. Still, she said, border state governors will be given an opportunity to weigh in on their needs before troops arrive.

The exact role troops will have has not been determined, but Secretary Nielsen said the deployment will likely model a similar operation that occurred under President George W. Bush. Both Bush and Barack Obama deployed National Guard troops to the border during their administrations.

Trump has said in recent days that he wants to send the military to the southern border as part of a crackdown on illegal immigration.

“The Mexican border is very unprotected by our laws,” he said at a press conference with Baltic leaders on Tuesday. “We have horrible, horrible and very unsafe laws in the United States and we’re going to be able to do something about that soon.”

Experts caution that Trump should not expect that to make a big difference, based on past experience.

Amid a series of protests on both sides of the immigration debate, President Bush sent 6,000 National Guard troops to the southern border in 2006. The troops were deployed to aid U.S. Customs and Border Protection agents while new recruits were being trained and help with the installation of fences and vehicle barriers. They were not, however sent to directly engage in law enforcement activities.

“The United States is not going to militarize the southern border,” Bush said at the time. “Mexico is our neighbor, and our friend. We will continue to work cooperatively to improve security on both sides of the border … to confront common problems like drug trafficking and crime … and to reduce illegal immigration.”

The deployment lasted for two years and after year one the number of troops fell by half. During the mission, known as Operation Jump Start, National Guard troops assisted in the apprehension of over 170,000 immigrants and the seizure of over 320,000 pounds of marijuana and cocaine.

President Barack Obama authorized 1,200 National Guard troops be sent to the Southern Border two years after Jump Start ended in 2010. According to a 2010 report from the New York Times, Obama was facing pressure from lawmakers to boost security at the southern border after a prominent rancher was allegedly killed by a smuggler. During what was known as Operation Phalanx, which lasted about a year, some 14,000 pounds of drugs were seized and 7,000 people were apprehended.

A 2012 report from the Government Accountability Office found that while there were some benefits, the operations cost about $1.35 billion and presented some challenges for both the Department of Homeland Security and the Pentagon. And while the Border agents served as force multipliers, their presence was not exceptional. Because the Pentagon had restricted the level of enforcement activity the troops could engage in — an effort to lessen the appearance of a militarized border — Border Patrol agents carried out all arrests and seizures.

In 2011, the head of Arizona’s National Guard told the Washington Post that his soldiers primarily served as “eyes and ears” at the border. “We don’t chase anybody,” said Maj. Gen. Hugo E. Salazar.

In the meantime, the border is already seeing less action, contrary to Trump’s assertions. Apprehensions at the southwestern border, which are used to gauge border crossings, reached near-historic lows in Fiscal Year 2017. While there have been some slight increases in apprehensions so far this year — there was a 2.4% increase in February 2018 — the numbers are still low when compared to previous years. At the press briefing on Wednesday, however, Secretary Nielsen said crossings continue to increase and that the administration is hoping to get ahead of rises that typically come in the spring. Of the deployment, she said, “partly it’s modeling, partly it’s anticipatory.”

“The threat is real,” she said.

Critics of President Trump’s immigration policies — and even some supporters — have concerns about the president’s proposal to deploy troops. Mark Krikorian, the executive director of the Center for Migration Studies, told Politico that he is not opposed to lawful use of the military if it is useful.

“I’m just afraid for a lot of politicians it becomes a shiny object that can distract attention,” he said. 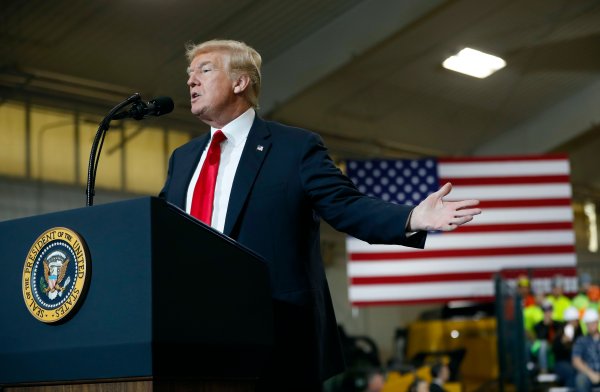 President Trump Attacked Amazon Again, But He Got This Basic Fact Wrong
Next Up: Editor's Pick