It’s no secret that President Donald Trump loves to tweet. His messages have been known to include a typo or two — including some misspellings. So Jimmy Kimmel decided to put some of L.A.’s best young spellers to the test: could they get inside Trump’s brain and recreate the same mistakes?

“This is not an ordinary spelling bee,” Kimmel told the three middle school contestants brought on his show. “This spelling bee is presidential. Which means you’ll be asked to spell the words I give you not the liberal leftist dictionary spells them, but rather the way our president does.” There was another difference: winners would receive a monetary award for each “correct” answer. “And whoever has the most dollars at the end is the winner, just like in life,” Kimmel joked. “And if you’re the winner, do you know what that makes the other two players? Losers, that’s right.”

Kimmel then tested the kids on the words “honored” (which Trump had spelled “honered”), “tap (“tapp”), “ridiculous” (“rediculous”) and more. Ultimately, only one of the contestants was able to match the President’s particular style of misspelling, for which she received her prize as the inaugural winner of the “Make America Grate Again” Spelling Bee. Watch them battle it out for the worst spelling, above. 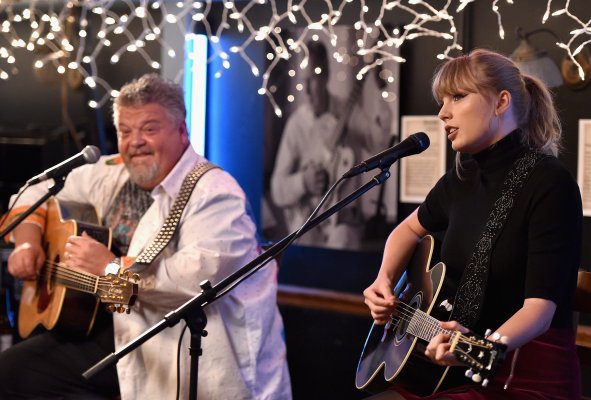 Taylor Swift Celebrated Easter with a Return to Her Roots
Next Up: Editor's Pick