What do you get when you combine a suitcase full of of pepperoni and a room full of seagulls? You get banned from a hotel for 17 years.

Nick Burchill was on a business trip to Canada’s Victoria, British Columbia when a series of unfortunate events led to him being banned from the Fairmount Empress hotel until last week, when he made a plea for clemency, as the CBC first reported.

Burchill’s story, which he posted on Facebook, began when he checked into the Fairmount Empress with a suitcase full of the Nova Scotia specialty Brother’s Pepperoni, which he planned to share with his Navy buddies. He didn’t want the pepperoni to spoil before he got it to them and, because the hotel room didn’t have a refrigerator, he decided to open the window to let the air keep things chill. He then left the room for a few hours.

When he returned, it was like a scene straight out of Hitchcock’s The Birds. There was an entire flock of seagulls in his room, he says, snacking on his pepperoni – not a pretty sight. As Burchill noted in his Facebook post about the saga, which has been shared nearly 4,000 times, “There must have been 40 of them and they had been in my room, eating pepperoni for a long time.”

“In case you were wondering, Brothers’ TNT Pepperoni does NASTY things to a seagull’s digestive system,” he added.

From there, it went downhill. Startled by Burchill’s return, the birds all attempted to flee the room, some through closed windows. In a fit of frustration, Burchill threw his shoe at one of the last remaining birds, which flew out the window. He also chucked another seagull that he had somehow wrapped in a towel outside (the bird was unharmed, he says). All of this apparently went down in full view of other guests.

Burchill eventually called the front desk for help and they sent up housekeeping, and when he reutned from a business meeting later that night, he had been moved to a different room. He was allowed to stay at the hotel for the duration of his trip, but the hotel later told his employer that Burchill was no longer welcome at the Empress.

Seventeen long years later, Burchill returned to the hotel to apologize for the incident and to try to convince them to lift the ban. According to Burchill’s Facebook post, he presented the hotel with a pound of the aforementioned pepperoni as a “peace offering.” The hotel reviewed his plea and lifted the ban.

If Burchill’s tale can teach us anything, it’s that no one can resist pepperoni.

You can read his full account and see the moment he dropped off fresh salami to hotel staff below. 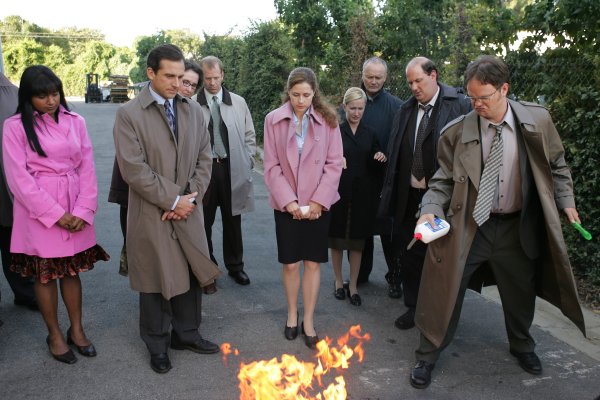 A College Student Saved a Drowning Squirrel Using a Trick She Learned From The Office
Next Up: Editor's Pick