'The Democrats Have Really Let Them Down.' President Trump Brought Politics to the White House Easter Egg Roll

The White House Easter Egg roll is an annual event usually insulated from the politics of the day. But President Donald Trump, surrounded by the typical tableau of pastel-attired children and colored eggs, bashed Democrats in response to a question about DACA at his second egg roll Monday morning and boasted about military spending.

Read More: The Facts About President Trump’s Claim There’s a ‘Caravan of Immigrants’ Trying to ‘Take Advantage of DACA’

Monday’s egg roll was held on an unseasonably chilly, gray day, brightened by the hot pink hats and aprons worn by the event staff. “It was supposed to be very rainy and nasty and cold and windy,” Trump said in his official remarks. “And look what we have: perfect weather.”

He praised First Lady Melania Trump for putting together the event, and for her work with the White House Historical Association to keep the White House in “tippy-top shape.” Even here, Trump couldn’t resist politics. He touted the recent boost to military funding, saying the U.S. military “will soon be at a level that it’s never been before” and “the funding of our military was so important.”

Bruce Dooyema, a chicken farmer from Iowa and member of the American Egg Board, said 30,000 hard-boiled eggs were donated to the egg roll. He said he didn’t know if the first lady likes eggs, but that she and the president had breakfast Monday morning with three farmers and their families.

White House staff and cabinet secretaries wandered the lawn as kids rolled the eggs and bowled on the lawn — Melania Trump’s new contribution to the event’s lineup of activities.

Outgoing economic adviser Gary Cohn appeared early in the day. Chief of Staff John Kelly walked by holding a little girl with a pink bow in her hair. Energy Secretary Rick Perry chatted with others standing in the egg rolling area. Director of National Intelligence Dan Coats read a story book to an assembled group of children, exclaiming during the reading, “Man, this giant was one ugly dude!” Press Secretary Sarah Sanders, Counselor to the President Kellyanne Conway and Education Secretary Betsy DeVos were also scheduled for time with kids in the “reading nook” on the lawn.

Multiple members of the Trump family also showed up to the celebration. Tiffany Trump walked in with Don Jr. and his wife and kids, and Melania and the President arrived with their son Barron. After the First Couple blew the opening whistle for a few rounds of egg rolls, Melania read a book aloud to guests. Last year she chose “Party Animals” by Kathie Lee Gifford; this year it was “You” by Sandra Magsamen, a book of encouraging affirmations.

“Look at life from different points of view,” she read to the assembled children. “Turn things upside down if it suits you.” Then she thanked the guests and headed back inside the White House. 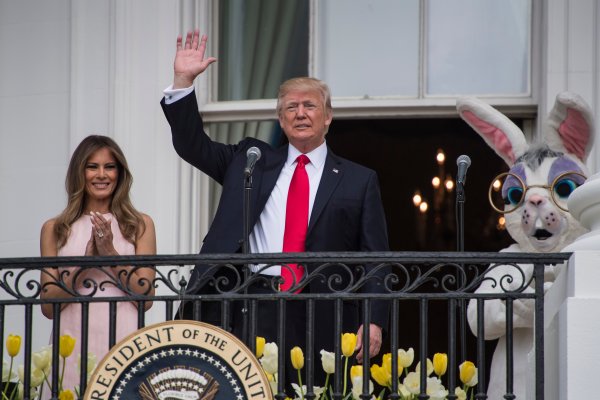 President Trump and the First Lady Are Hosting the 2018 White House Easter Egg Roll. Watch It Live
Next Up: Editor's Pick