Fifty years ago, early in the evening of Thursday, April 4, 1968, as he campaigned for the Democratic presidential nomination in Indianapolis, Robert Kennedy learned of the assassination of Martin Luther King Jr. He was about to deliver a speech in a predominantly African American neighborhood in that city. Deeply grieved personally, Kennedy faced the awful task of breaking the news of King’s death to a largely unsuspecting crowd. That night in Indianapolis, haunted by his own personal demons, Kennedy delivered a Gettysburg Address for the 20th century, an unscripted funeral oration that took from tragedy a vision of freedom and equality that defined the American promise.

Like Lincoln, who had seen the deaths of two children, a sister, and a beloved young mother, Kennedy spoke from his own experience of agony and loss. This made it possible for him to open his soul in ways that no other American leader, then or now, could contemplate. Kennedy’s pain over the preceding four-and-a-half years had been almost unendurable. He was not so much his assassinated brother’s alter ego as his second self. The brothers could complete each other’s sentences and communicate by glance and gesture. RFK’s identification with the late President had been so all-consuming that he had taken to wearing his clothing; indeed he was wearing JFK’s overcoat on the night of King’s murder.

Robert Kennedy spoke publicly of his brother’s death for the first time that night, shocking long-time aides who had never heard him mention it directly: “For those of you who are black and are tempted to be filled with hatred and mistrust … against all white people, I would only say that I can also feel in my own heart the same kind of feeling. I had a member of my family killed, but he was killed by a white man.”

As Lincoln had at Gettysburg, Kennedy borrowed from the past. He offered the words of the Greek poet Aeschylus, who counseled a war-weary people in another age that “in our sleep, pain which cannot forget falls drop by drop upon the heart until, in our own despair, against our will, comes wisdom through the awful grace of god.” Kennedy asked his audience, again borrowing from the ancient Greeks, “to tame the savageness of man and make gentle the life of this world.”

Out of the mouth of any contemporary politician, these words would seem out of place, even ludicrous. But Robert Kennedy could allude to classic tragedies with conviction and authority and carry his listeners along with him because they were the product of his own personal pain and despair. Only Robert Kennedy possessed the moral authority to assume the martyred King’s mantle and ask the stunned crowd for “love and wisdom, and compassion toward one another, and a feeling of justice toward those who still suffer within our country, whether they be white or whether they be black.”

Compassion and justice. Like Lincoln a century earlier, Kennedy understood that America needed both. Also like Lincoln, Kennedy had turned his agony into wisdom. When the time came to offer its hard-earned fruits, he was ready to meet the moment.

Robert Kennedy saved lives that night. At the conclusion of his speech, the crowd dispersed quietly; alone among major American cities, Indianapolis suffered no violence in the wake of the King assassination. But, of course, Kennedy could not save his own life. Two months later, he would be dead, yet another victim of the violence engulfing the nation in that extraordinarily violent year.

It is doubtful that a speech such as Kennedy’s could have the same effect today. The cynicism and distrust that have set root in 21st century culture would make it almost impossible to reproduce the communion he forged with his devastated listeners. A contemporary candidate would also likely have been talked out of giving such a speech by risk-averse political consultants wary of its impromptu nature and racially charged subject matter. But we are a better nation for Robert Kennedy’s determination to speak from the depths of a wounded heart to others who bore similar burdens of grief. Out of two unspeakable American tragedies came a modern Gettysburg Address that continues to challenge us to live up to what America can and should be. Even in the midst of our own low, dishonest decade, his voice rings true. Like Lincoln’s, it belongs to the ages.

Jerald Podair is Professor of History and the Robert S. French Professor of American Studies at Lawrence University. He is co-writing a book about the transformation of the Republican Party in the 1960s and 1970s: “Spiro Agnew and the Making of Donald Trump’s America” (University of Virginia Press). 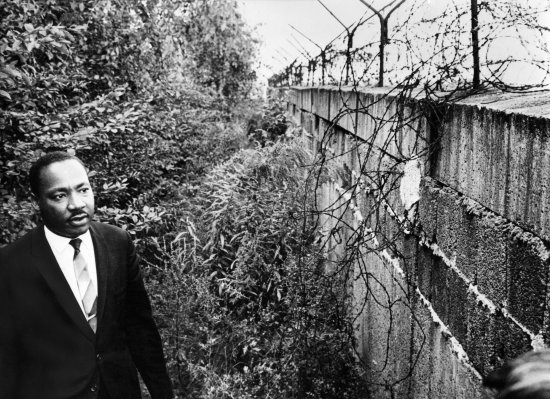 Martin Luther King Jr.'s Vision Was More Global Than We Remember. The World Mourned Him Accordingly
Next Up: Editor's Pick