Howard University students occupied the school’s administration building for the second day on Friday in a protest fueled by outrage over a financial aid scandal.

The sit-in began Thursday and continued Friday as students called for the resignation of Howard President Wayne Frederick, following revelations this week that six employees were fired last year for “gross misconduct and neglect” related to the misappropriation of financial aid funds.

In a statement on Wednesday, Frederick said he first learned of a possible problem in December 2016 and launched an investigation, which determined that from 2007 to 2016, some university employees received a combination of tuition remission and grants that exceeded the total cost of attendance. The revelations sparked outrage from students, who criticized Frederick for not disclosing the issues sooner.

“This matter is extremely disheartening because financial aid remains the primary barrier for Howard students to complete their education, and this theft serves a direct attack and insult to our community,” the Howard University Student Association said in a letter to the student community on Thursday, demanding that the university reveal more information about the investigation findings and take steps to help students who have been “wrongfully denied need-based University aid.”

Students protesters stayed in the administration building overnight, watching a documentary about students protests at the university, working on homework, hanging up signs listing their demands and blocking administrators from the building.

“I am listening to you, and I am challenging my team to make the changes you are expressing a dire need to see,” Howard President Wayne Frederick said Friday, responding to a broad list of demands from the group #StudentPowerHU.

Those demands — which were published before the financial scandal came to light this week — include a call for adequate housing for all students under 21, an end to “unsubstantiated tuition hikes,” a stronger commitment to fighting sexual assault, better resources for mental health issues and the resignation of Frederick and the Board of Trustees.

“I look forward to meeting with student leaders to hear your voices, and to our continued townhall meetings where my team and I get to answer questions from our campus community at large,” Frederick said in his response. “Your concerns are valid. We are listening. We are committed to jointly making changes to move Howard Forward.” 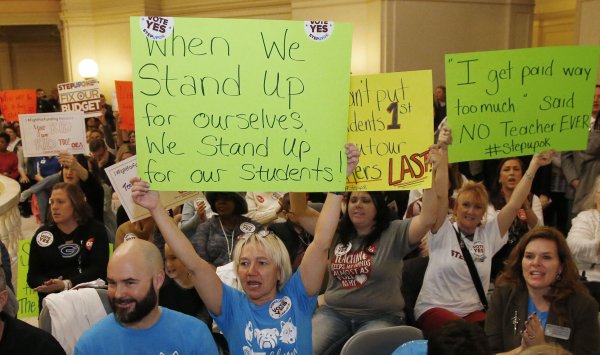 Oklahoma Teachers Just Got a $6,100 Pay Raise. They're Going to Strike Anyway
Next Up: Editor's Pick