5 Things Written by Martin Luther King Jr. That Everyone Should Read, According to an Expert

Dr. Martin Luther King addresses some 2,000 people on the eve of his death—April 3, 1968—giving the speech "I've been to the mountaintop."
Bettmann/Getty Images
By Lily Rothman

The words written about Martin Luther King Jr. during his too-short life and in the decades since his assassination on April 4, 1968, would be impossible to count. King himself left a deep archive of writings, speeches and sermons, too. His spoken orations in particular are a powerful reminder of why he was destined to become part of the pantheon of American icons.

“One has to remember that King above all was a preacher,” says Carolyn Calloway-Thomas, chair of African American and African Diaspora Studies at the Indiana University Bloomington and an editor of Dr. Martin Luther King, Jr. and the Sermonic Power of Public Discourse.

While she notes that he was so prolific that it’s near impossible to choose, Calloway-Thomas spoke to TIME about the pieces of King’s work that everyone should know about. They are:

“The death of the Egyptians upon the seashore is a glaring symbol of the ultimate doom of evil in its struggle with good.”

This sermon was delivered to a massive crowd at the Cathedral of St. John the Divine in New York on the occasion of the two-year anniversary of the Supreme Court’s Brown v. Board of Education ruling against school segregation, at an early moment in this phase of the civil rights movement, with the Montgomery bus boycott still ongoing. To Calloway-Thomas, the sermon is noteworthy for the optimistic vision it presented at such a moment. “He had to help African-American people imagine themselves,” she says. “I think the Death of Evil upon the Seashore is that speech.”

It wasn’t the first time King preached on these ideas, and in fact the link he draws between the Biblical exodus and the story of African-American progress toward freedom and equality was an old one, but those present noted that his delivery that day was particularly moving. “He taps into that reservoir, that myth of the Hebrew children in bondage,” Calloway-Thomas says, “and he elevates it and makes it more publicly known.”

“Injustice anywhere is a threat to justice everywhere. We are caught in an inescapable network of mutuality, tied in a single garment of destiny. Whatever affects one directly, affects all indirectly.”

Yes, this is a letter, not a speech or sermon — but Calloway-Thomas says it’s worth including on such a list anyway. After all, the circumstances that created this letter are inherently linked to the fact that he couldn’t deliver a speech in person. At the time, King found himself jailed in Alabama after ignoring an injunction against protests in Birmingham. During that time, a group of clergymen wrote an open letter urging him away from protests. He wanted to respond but, from the jail, his only option if he wanted to answer quickly was to write it down. “Ideas have moments and if those moments aren’t used, you lose that rhetorical moment and it no longer has the force it had,” Calloway-Thomas says.

So, in a format she likens to a spoken call and response, he answers the questions that were posed to him about his methods. While also explaining that he’s on strong biblical footing, he provides the public with a way to understand the work he’s doing. His rhetorical skills are also on display as he uses a story about his 6-year-old daughter’s early perceptions of racism and segregation to underline that the matter is not theoretical. In the years since, this letter has become one of 20th century American history’s most famous documents.

“I have a dream that my four little children will one day live in a nation where they will not be judged by the color of their skin but by the content of their character.”

The speech that remains Martin Luther King Jr.’s most famous oration — one of the most famous orations in American history, if not world history — is that well-known for a good reason, Calloway-Thomas says. This was the moment when the world as a whole really saw King, and the moment was carefully orchestrated, framed by the Lincoln Memorial. “Think about how dazzling that was!” she says. “Think about the robust visuals and the lovely words echoing from Dr. King. It was an elixir that was made to circulate.”

But, she says, the power of his voice and the impact of the image can sometimes overwhelm the full message of the speech. “Dr. King had some pretty radical statements in that speech,” Calloway-Thomas adds. “Most people gloss over the part in that speech where King says that if we overlook the urgency of now there’ll be a rude awakening. I’ve never seen a student go to that section of the speech; people go right to ‘I have a dream’ and they don’t notice the threat.”

“We still have a choice today: nonviolent coexistence or violent coannihilation. We must move past indecision to action. We must find new ways to speak for peace in Vietnam and justice throughout the developing world, a world that borders on our doors.”

In this speech, King publicly answers his conscience, as Calloway-Thomas puts it, on the matter of the Vietnam War. With an undercurrent of “anguish” about the fact that he feels he must speak, and must criticize the choices of Lyndon Johnson, who had often been an ally, he entered the arena of opposition to the war.

“This is an unsettling moment. People paid attention, but that meant there was backlash,” she says. President Johnson and many others felt that he ought to stay focused on domestic civil-rights issues and leave the foreign policy to them, but in this speech he makes clear why those two topics cannot truly be separated. That idea, Calloway-Thomas says, parallels the experience of earlier fighters for justice, such as Frederick Douglass, who got to the world stage with one kind of story — their personal freedom narratives, in that case — and shocked some of their allies when they showed that their thinking was far more expansive.

“I may not get there with you. But I want you to know tonight, that we, as a people, will get to the Promised Land.”

Start with the date on this one: that’s April 3, 1968, the night before King was assassinated. In this speech, which summons King’s primary background as a preacher, he returns to the story of Moses. Rather than speaking on the joy of the Exodus, though, he turns to the end of Moses’ life, and his death just outside the Promised Land to which he had delivered his people. King casts himself as another leader who may not be there for the end of the journey. “He used Christian values and Democratic traditions to bring people together, so it’s not surprising that he goes to this idea,” Calloway-Thomas says. “What’s significant here is when it occurred. It was almost apocalyptic. Because it occurred at that time it has lingering significance and carries with it an abundance of pathos.” 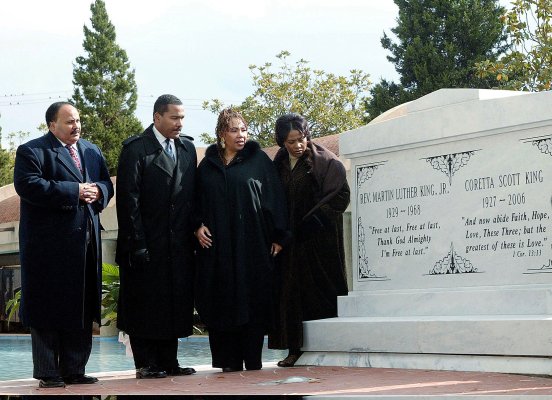 How Martin Luther King Jr.'s Children Are Carrying on His Legacy 50 Years After His Death
Next Up: Editor's Pick