In Miss You Like Hell, Jiménez and Rubin-Vega wrestle with the personal and the political
Joan Marcus
By Eben Shapiro

As a little girl, Quiara Alegría Hudes would accompany her mother to a women’s health clinic she ran in North Philly. There, she would watch her mother help women in the heavily Latinx community navigate the perils of the nation’s immigration laws. The dramas the 5-year-old absorbed ranged from major crises–including the despair and disruption over a family member being deported–to the daily fears of interacting with a system when your status is not secure. One vivid memory: a woman in labor was terrified to go to the hospital because she was certain she would be taken away after giving birth. Only when Hudes’ activist mother arranged for a lawyer to accompany her to the hospital did the woman relent. “This is something I’ve been processing my entire life,” says Hudes. “Now the entire nation is processing it together.”

Such experiences shaped Miss You Like Hell, a musical that Hudes, the first Latina to win the Pulitzer Prize for Drama (for Water by the Spoonful), created along with songwriter Erin McKeown. The show stars Daphne Rubin-Vega, who was central to the original production of Rent, and Gizel Jiménez. Its New York premiere is on April 10, at the Public Theater.

Musicals have a multiyear gestation process, and Miss You Like Hell has the artistic good karma to arrive on the New York stage at a moment when immigration issues are also front and center on the national political stage. It centers on an estranged mother and daughter reconnecting after years apart, but the looming backdrop is the mother’s pending deportation hearing. The question of who gets to be a citizen is an issue as old as America; still, when Hudes and McKeown began collaborating on the show in 2011, Dreamers, ICE and “Build a wall!” weren’t as much a part of the political discourse. An earlier version of the show opened at the La Jolla Playhouse in fall 2016.

The musical relates the odyssey of Beatriz driving with her estranged daughter Olivia from Philadelphia to L.A., with detours to a mall in Ohio, a fraught traffic stop in Wisconsin, the marriage of two aging gay bikers in Indiana and a glorious trip to Yellowstone. (One crowd-pleasing song is “Yellowstone,” which McKeown describes as “an urban slow jam about a national park that owes a debt of gratitude to Prince and Michael Jackson.”) The story ends at a park at the U.S.-Mexico border, with a giant wall dividing the stage.

Alongside the two stars, the cast features a chorus of eight, who collectively represent the diversity of America. Director Lear deBessonet has been with the show since 2013. One of deBessonet’s great strengths is casting, and her productions always include spectacularly idiosyncratic performers, with a wide range of ages and body types. “I find regular people beautiful and want to put them onstage,” she says. Ripped performers with long legs, she says, are “not the only people that can sing and dance.”

Given the topicality of the production and the Public Theater’s tradition of producing shows that spark conversation–including hits like Hamilton and Fun Home–the creative team is working hard to ensure that Miss You Like Hell gets a broad audience. That includes extending invitations to students from schools that have a high percentage of immigrant parents. Hudes, who has been mentoring a group of Washington State high school students who call themselves the Migrant Leaders Club, arranged a grant to fly them to New York to see the show. “And it would be great,” says deBessonet, “if some Senators come too.” 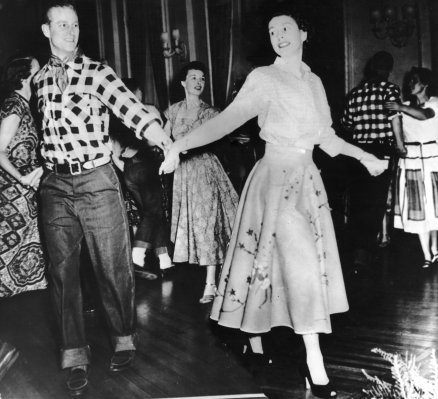 The Surprising Broadway Musical That Provided the Soundtrack to a Real-Life Royal Romance
Next Up: Editor's Pick