For one of the most vilified women in America, Cecile Richards is very warm. She’s self-deprecating, lively and attentive to guests. She apologizes for the terrible coffee an assistant brings from the office machine but drinks it anyway. Her mascara is a little smudged over her right eye. She looks down when thinking; it’s not effortless for her. She’s human.

But until May, when she decamps her post, Richards is also the president of the Planned Parenthood Federation of America, an organization that provokes only strong feelings in people. Reliable surveys show that most citizens do not believe Roe v. Wade should be overturned. Other equally reliable surveys show that most Americans answer no when asked if a woman should be able to get an abortion “for any reason.” And almost 20% of voters told Gallup in 2015 they could only vote for a candidate who shared their views on abortion. So Richards has been hailed both as “an extraordinary leader in vertiginous times” (by the editor of the Nation) and “the most vile person currently walking this planet” (by a writer for RedState).

In a fractured America, the biggest fault line runs through abortion. In many ways, the rumble over abortion rights was the foreshock for the many ruptures the U.S. is now facing — Black Lives Matter vs. Blue Lives Matter, #MeToo vs. “witch hunt,” #enough vs. protecting the Second Amendment, the President is reckless vs. the President is authentic. That means Richards is in the vanguard of leaders who have had to navigate their cause through very hostile terrain.

Her strategy, as recounted in her new memoir-handbook, Make Trouble, has always been to push harder into the storm. When she took the reins at Planned Parenthood in 2006, with no background in health care, the organization didn’t even have a centralized website. It now does, and much more political heft. President Obama mentioned Planned Parenthood during the 2012 presidential debates. In 2016, it launched a voter-registration drive. It threw its weight behind successfully protecting the Affordable Care Act in 2017.

This newfound influence was not without cost. In 2015, Richards faced five hours of mostly hostile grilling by Congress after some activists released video purporting to show that the organization illegally sold fetal tissue. (Several investigating committees found nothing illegal, and the activists behind the footage later faced felony charges, which are ongoing.)

Planned Parenthood has largely prevailed. The most recent spending bill — passed by a Republican Congress — allows Planned Parenthood to continue to access taxpayer funding, which in the most recent fiscal year amounted to more than $500 million. At the same time, the organization has fewer clinics and affiliates now than when Richards started. This is partly because more women are using long-acting reversible contraceptives (like IUDs) or getting their health needs met online. It’s also because the litany of local regulations that states have placed on abortion clinics have forced many to close. For lots of women, it’s harder to get an abortion today than it was a decade ago.

At 60, Richards is moving on, though not to something a little less 24/7 or challenging or contested. Where’s the fun in that? Her new focus will be to increase and organize the number of women who run for office and who vote. The 2016 election was a personal disappointment — her oldest daughter Lily Adams worked on Hillary Clinton’s campaign — but she saw in it a hint of light. “I have a theory that there are a lot of women in this country who are frustrated and maybe some of them expressed it in their votes,” she says. “I don’t think they’re ecstatic about this President. I think a lot of them just feel unheard.”

Would she run for office? After all, her mother, Ann Richards, was a 58-year-old divorced Democrat and recovering alcoholic who became governor of Texas in 1991. And Richards, pregnant with twins and bringing along a toddler for the ride, helped run her campaign. “We still go back, Kirk [Adams, her husband, who is also an organizer] and I, and look at the numbers and think how did we do that?” says Richards.

But her real strength, she believes, may be in getting others elected. She knows — and has probably charmed — somebody in every congressional district in the country. “I can’t go to a town now that I don’t find a little group of women or maybe a bigger-ish group of women that have just started self-organizing,” she says. “What if we could actually get all of them to focus on voting? They can march in knit hats and go to town-hall meetings, but if everyone voted, things would change.”

The very first time Richards was accused of being a troublemaker was when, at age 11, she declined to say the Lord’s Prayer at University Park Elementary School in Dallas. The second, she writes, was when she wore a black armband to her Austin middle school to protest the Vietnam War and was sent to the principal’s office. He tried to call her mother, who didn’t answer, which Richards calls “one of the luckiest moments in [his] life.” The thrill of standing up to authority so exhilarated her that she was set on her path.

Her Texas upbringing and early years in the labor movement have served her well. She’s not averse to hobnobbing in elite circles — she was at the Academy Awards this year and has worked for Ted Turner and Jane Fonda’s foundation — but she can also find common ground with those who are struggling to make ends meet, which goes some way to neutering any accusations of out-of-touch liberal elitism. She tries to emphasize her down-home roots in the book. Alongside the advice on political organizing, she offers notations on what she was listening to and cooking at the time the events took place. She even offers parenting tips, which can be summarized as: Get the kids to pitch in.

Last year, after the latest attempt to defund her organization had been turned back, Richards was at a celebration in Nashville. She had just finished thanking the crowd for all its work when an audience member raised his hand and asked what now could be done for the Dreamers, the undocumented children who grew up in the U.S. but are not citizens. “I had assumed that they were going to go, ‘This is great because I’ve got to take a break,'” she says. Instead, people were coming together not over a single issue but because of a set of shared values. They were massing to protect a certain bigger vision of America. “It’s different than any time I can remember in my lifetime,” says Richards. That’s the kind of barometric indicator that no organizer can resist. 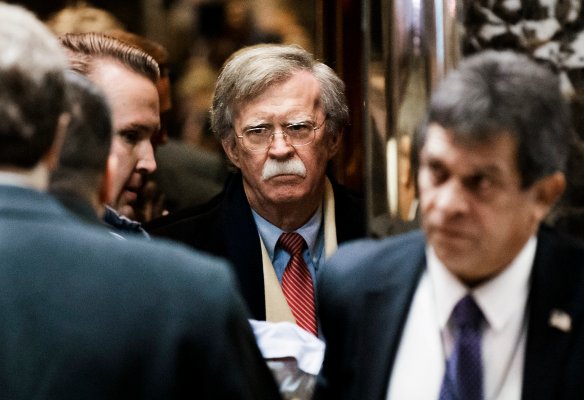 John Bolton Is Trump's Newest Hawk. How Tough Will He Be?
Next Up: Editor's Pick