It wouldn’t be surprising to hear someone who appreciates poetry say that verse can be invigorating. But for Sen. John McCain (R-AZ), poetry literally kept him alive. He describes how it happened in the exclusive clip above, from the public television series Poetry in America, which premieres during the first week of April just as National Poetry Month begins.

McCain spent more than five years in the prisoner-of-war camp known as the “Hanoi Hilton” during the Vietnam War, between October of 1967 and March of 1973. To keep their minds active, for a time McCain and Bill Lawrence, the man in the cell next door, memorized Robert W. Service’s “The Cremation of Sam McGee,” a 1907 poem about a Yukon gold rush prospector who fulfills his friend’s dying wish of being cremated after he freezes to death on the trail. The tale of loyalty and survival must have particularly resonated with two men trying to help each other stay alive in the POW camp.

In the clip, McCain talks about how he and Lawrence recited the poem to each other with taps through the wall, in their own version of Morse Code.

“He would tap to me a couple lines of this every day for quite a while, and I would then tap it back to him, and that’s how I learned it,” he tells the show’s host and director Elisa New, a professor of American Literature at Harvard University.

McCain’s memory of the poem became widely known on the 2000 campaign trail when, as the Weekly Standard‘s Andrew Ferguson reported at the time, Comedy Central attempted to trip up the then-candidate by asking him to recite poetry by his favorite poet — he surprised them by being able to recite all 14 stanzas.

He’s not the only prominent person to have sought solace in Service’s poetry. The Texas oilman who became the first person to climb the highest peak on seven continents would recite it to comfort himself in his tent. Ronald Reagan was known for reciting it and other Robert Service poems to friends and family, most famously in 1984 when he and the Queen Mother bonded over their shared love of the poet and rattled off “The Shooting of Dan McGrew” together during a Buckingham Palace banquet. 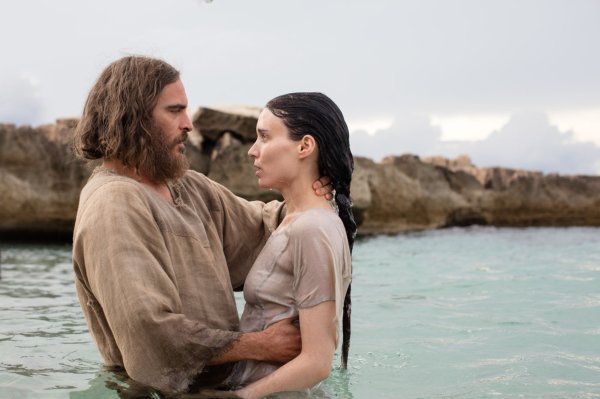 The Real Reason Why Mary Magdalene Is Such a Controversial Figure
Next Up: Editor's Pick